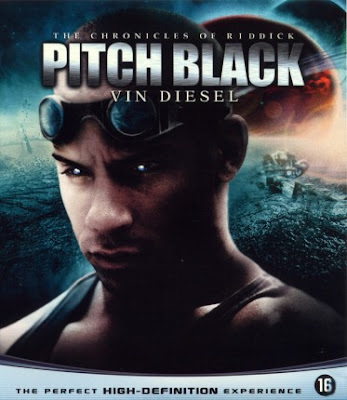 I have made it my mission with the release of the new Riddick film later this year to watch all the Chronicle of Riddick films.  Starting with the games Escape from Butcher Bay and Assault on Dark Athena (that are set before Pitch Black) I sallied forth onto this one, the next in the series.

Pitch Black again stars Riddick (Vin Diesel) who is once again a prisoner of bounty hunter Johns (Cole Hauser). A transport ship carrying them and other passengers is damaged and forced to crash land on a harsh desert planet. With most of the occupants dead the survivors team up to find water and a way off the planet. Salvation is found in the form of an old ship that just needs power cells to be space worthy. Not trusting Riddick (who has been freed in exchange for his muscles) Johns forbids the ship from being flight worthy until the last possible moment. Unfortunately this is a bad idea as a sudden eclipse of all 3 suns of the planet bring about monstrous beings from underground. In the pitch black the survivors must work together to transport the needed power cells from the crash site to the ship. The monsters are perfectly adapted to hunt in the dark, only afraid of light of which the supply is dwindling.

I have said before but the character of Riddick is not at all likable. A tough guy who can move like a shadow and see in the dark he is blunt, humourless and just appears like the most miserable person who ever existed. Hard to root for an idiot. Hauser does a good turn as Johns who at first seems like he will be the films hero but increasingly things come to light that show him far from angelic.  The other characters are a collection of bland supporting actors (a comedy character, preacher man, random identical looking children and a Riddick clone). Ships captain Carolyn Fry (Radha Mitchell from Silent Hill) does a good turn as a strong female lead.

The monsters/aliens/insects whatever you want to call them are ok looking, sadly a lot of bad CGI is used, the monsters are never particularly frightening, never felt any peril for the characters, especially near the end when the film kinda forgets that the light is the only thing stopping the humans from being ripped apart.  Pitch Black does a good job in the build up, the crash at the start is quite well done, and the early exploration and piecing together of what has happened to the abandoned colony is well handled with some great saturated light effects giving an other worldly feel to the place. 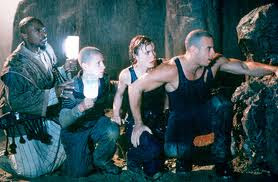 As a whole Pitch Black just feels grim and joyless, there is no one to root for, there is no resolution at the end, it needed characters you care about, otherwise who cares if they live or die? It is well shot, well directed with some great looking scenes and a dirty sci-fi feel to things. It just kinda peters out in the second half becoming strangely uneventful and unavoidably bland looking.