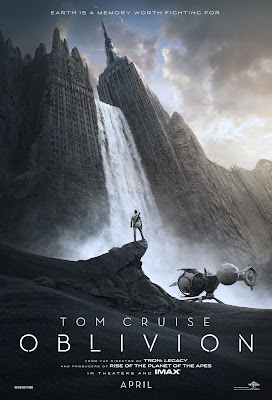 I don't know what they were thinking with this big screen adaption of The Elder Scrolls IV: Oblivion videogame, it's not even a fantasy film, it's sci-fi!...just my little joke there. Oblivion is of course the new Tom Cruise film, he may have some insane beliefs in his personal life but in films I still think he is a damn fine actor.

Cruise plays 'Jack' a drone service repair man who is stationed on post apocalyptic Earth with his co-worker Victoria (Andrea Riseborough). 60 years previous an alien force appeared and destroyed Earth's moon which devastated much of the world with earthquakes and tsunamis. The aliens (known as Scavs) then invaded Earth but were defeated via the use of nuclear weapons. Victorious but at the cost of their planet humanity relocated to Titan; a moon of Saturn. Gigantic machines were created to suck all the water off of Earth to convert it to energy and drinking water for the population on Titan, these are protected by drones programmed to kill any Scavs left alive on the planet. During a routine repair trip Jack encounters a series of events that lead him to question just what is really going on. 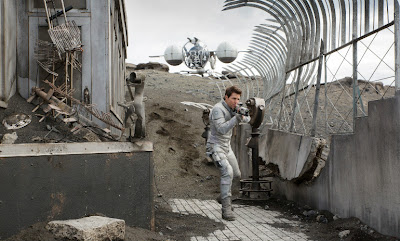 First off if you want to see this film and have not yet seen the trailer then don't! The film has many plot twists, one of which is given away in the trailer, not the biggest one but still I would have preferred to find it out myself. Everything is so big in this film, it really is beautiful the massive outdoors environments of the destroyed world. Most the human structures have been completely swallowed up by the earth, the Empire State building for instance has just the very top portion sticking out of the ground. One stunning scene had Jack riding a motorbike across what used to be a sea, the ghostly remains of boats and submarines half buried in the sand. This looks like a dead planet, apart from a mangy looking dog and one fish I don't remember seeing a single living animal in the whole film. Oblivion takes place in what would have been America, this is explained by the fact that it is a small pocket of un-radiated land in the whole planet, surrounded on all sides by danger zones which would cook Jack alive.

The plot twists are many and while I guessed some of them others were more off the wall. For the whole two hours running time I was totally engrossed, it is a well told tale it is just a shame that it is so unoriginal. The plot and story beats are kinda similar to Independence Day, War of the Worlds, and even Moon. It was hard to escape the fact that however well told the story was it was one that had traces of deja-vu to it, certain parts were almost identical. It has a few short, intense fight sequences, and a pretty decent chase sequence, the last battle in the film was kinda plain though.

The cast is bare bones but the key characters play their parts well. Olga Kurylenko as Julia; a mysterious woman Cruise rescues who he has had constant dreams of is likable, while Morgan Freeman is great as leader of the humans 'Beech' despite not getting much screen time. I have to say though that the character of Sykes (Nikolaj Coster-Waldau of Game of Thrones and Mama) is very plain and boring, designed as a stereotypical good guy he does the role it says on the tin I guess. The flying drones look fantastic, they have a real deep mechanical growl to them which reminded me very heavily of Half Life 2's combine soldiers death screams!

Oblivion looks and sounds fantastic with some solid performances and fun plot twists but I just can't get over the fact that it really does not do anything new. By all means see it, it is a good film just don't expect a revolution.

Posted by Daniel Simmonds at 06:05

Oblivion is good onetime movie, but was really expecting more from it. I would say watch it only for its visual effects and Tom Cruise. Story is very typical, infact felt it had some Indian touch in it. Like Indian version of Rocky or Behind enemy lines :P atleast concept was same. Although it would look great in theater, i felt spending Rs 320 at Fame for it wasnt really worth. Watch it on DVD when it comes, or rent it from video parlor. Dont want to buy DVD too for it.