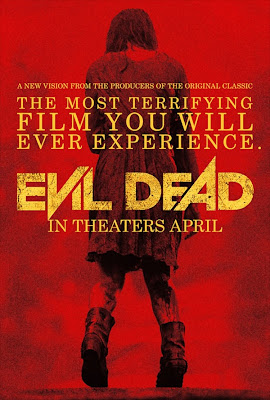 When news first reached me of a remake of Evil Dead I was horrified, Evil Dead is one of my all time favourite horrors, the idea of someone destroying its legacy with yet another terrible remake (ie: A Nightmare on Elm Street, The Fog, Friday 13th, The Wicker Man etc) was just too much to take. With not only Sam Raimi, but also legend Bruce Campbell as producers, and with a strong trailer my mind was changed.

Mia (Jane Levy) and her brother David (Shiloh Fernandez) have travelled to their remote childhood home along with three friends in order for Mia to kick her drug habit somewhere where there will be no temptations. In the basement of the old log cabin the group discover signs of witchcraft along with a strange book. One of the friends Eric takes a particular interest in the tome and while looking through it he speaks aloud an incantation and unwittingly summons a great evil. The evil possesses Mia, and one by one the friends fall victim to the demonic presence. Those left alive must find a way to stop the Evil Dead. 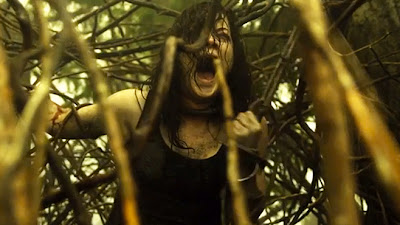 This film was advertised as being horror and horror it certainly is. There are no usual trappings of cliched teens making out with each other, cheesy jokes, or a 'hip' soundtrack this is grim, dark and intense. The original Evil Dead was thick with black humour, this less so, though some does appear here such as when David at one point says to a character who has just self mutilated herself (to paraphrase as always) "we're going to get through this, everything is going to be fine" to which Eric replies "She just cut her f**king arm off. Does that sound fine?", laugh out loud in context.

This is one of the most squirmy films I have ever seen, throughout I was wringing my hands at the grimness of it all, nearly looking away from the screen at points! Arms, hands and feet are severed, nails are fired into characters bodies, blistering bodies from scolding hot water, a needle jabbed repeatedly into a characters face, every kind of torture is used here, all looking realistic thanks to the wonderful decision to not use CGI unless necessary. It is like the torture porn of films like Saw and Hostel but with actual reason for it to exist. No characters emerges unscathed. Wince inducing horror at it's finest. There is also keeping with tradition a huge amount of blood and gore, characters get covered head to toe in the stuff, it even rains blood at one point! Dashings of vomit and even urine too keep this film disgusting. 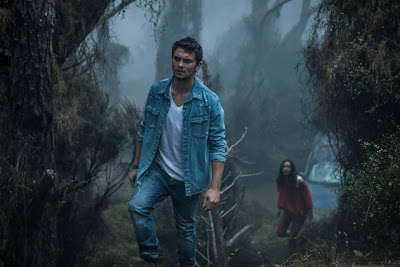 Do not mistake the over abundance of horrific mutilation as scary though, this film was not scary, and that was a damn shame. The original Evil Dead I found to be terror inducing at times but here it is never so, there is more order to how the group become under demonic possession, the victims are easier to dispatch, not seeming to have the superhuman strength the Deadites in the original had.

The plot is more complex this time around, the subplot of Mia trying to get over her drug addiction is well implemented in that the strange goings on Mia frantically tells the others about is put down to her having hallucinations, and the fact that her and David's mother went insane gives rise to an alternate theory that maybe nothing bad is happening, that it is all shown from the twisted perspective of insane, or hallucinating siblings. The book of the dead is more straight forward, giving a goal I guess for the Evil Dead. Must say the book here looks totally fantastic, scribbled over the pages someone has scratched in urgent warnings and clues such as 'LEAVE THIS BOOK ALONE', and 'HE'LL SUCK YOUR SOUL DRY'. Looks cool believe me! 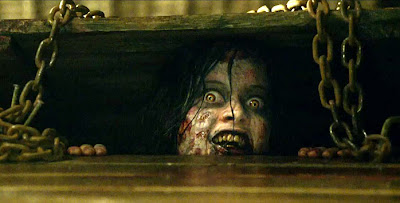 The basic plot is the same as the original and it is nice to see quite a few subtle references to it (including a cool after credits bit). The biggest problem I had other than the lack of scares is that it does get a little bit boring at times, the location and lack of real plot advances led to a slight staleness which I at first put down to being so familiar with Evil Dead, but speaking to others who had not seen the 80's one they too admitted to being a bit bored at times. Also the ending I just plain did not like that much, kinda silly and one liners are never a good idea...unless your Ash!

A very bloody, disgusting, wince inducing film, not a bad remake at all, just not that creepy and seems to run out of ideas about halfway through. I would still recommend it though just for it being a straight up no nonsense horror that doesn't try to pander to a casual audience.

Posted by Daniel Simmonds at 13:01