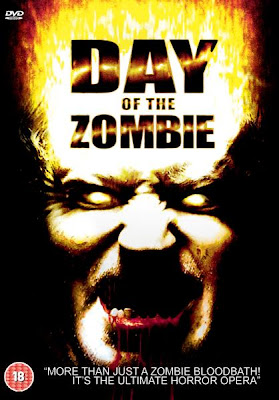 For whatever reason the title on the DVD case says 'Day of the Zombie', no ideas why as everywhere else says 'Song of the Dead'. Song of the Dead is a zombie themed musical that tries to be a homage to the George Romero classic 'Night of the Living Dead'.

While visiting her mothers grave a girl and her boyfriend Brad are attacked by zombies. Fleeing the scene they head to the girls fathers cabin out in the wilderness where they meet up with him, his son Harold, and a serial killer who had been passing by. Thinking it safer to stay at the house rather than try to go elsewhere they barricade the place. Their estimation of how many zombies are in the area is misjudged though, and the zombies seem to know exactly where they are so when the horde finally appears the surviving humans must try to survive the night. 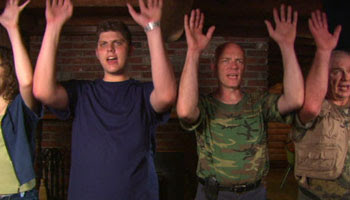 Song of the Dead is a budget film but despite that is still really not bad to watch, it never got boring. The actors/singers are for the most part terrible, some can sing, some cannot, some can act, most cannot but the soft rock tunes are inoffensive, there is never anything bad enough to make your ears bleed (apart from the stale dancing). Cult actor Reggie Bannister of Phantasm fame makes an appearance as the President of the United States but it has to be said he looks uncomfortable, and wooden in his role, especially for his song he has to try and sing.

The zombies look the part, I often say low budget make-up can look a lot better than some of Romero's later excesses, they are coated in blood, all looks good enough, is just a shame that the attacking scenes are let down by bad special effects so when people get killed it rarely looks good. The zombies have their own songs as well, the anthem for the zombies is a number called 'Flesh and Blood' which crops up a few times, is just unfortunate they decide to place a topless woman at the front of the zombie line up each time. I don't know what it is with budget films and feeling the urge to put some female flesh on show. Here, like others before it the nudity feels totally pointless, not needed in the least. The zombies sing in human voices, and dance as well in some choreographed scenes. One in which a bitten survivor says a sad farewell song is helped by the arms of zombies poking through boarded up windows swaying in time to the music, a nice touch. 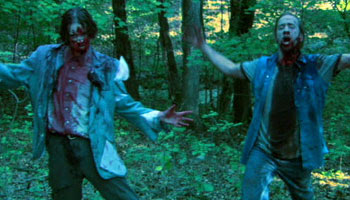 The plot is quite stupid with a lot of anti government/military/anti Taliban talk going on. Characters often squeeze in random facts about government spending on the military for no good reason, and the virus itself is named the Jihad Resurrection Virus. Zombies are portrayed as terrorists, most the characters refer to them as such, with discussion of if they deserve any rights, and the fact that as they are terrorists then there is no reason to feel bad about killing them. In Romero's original the survivors really knew how to hold up in a building. Here the survivors keep on leaving to scout around, not wise, and the film reflects this as most the characters are killed during these ridiculous outings.

So a lot of the older characters look identical, there is unneeded nudity that fails to give itself a reason to exist, the acting and singing is patchy at best, and the songs are as cheesy as hell but it still does something different. There have been musical horrors before (Repo! The Genetic Opera) and even zombie musicals before (the terrible Dead and Breakfast) but this is the first one that manages to keep a light hearted (albeit awkward direction. Very slightly better than average.