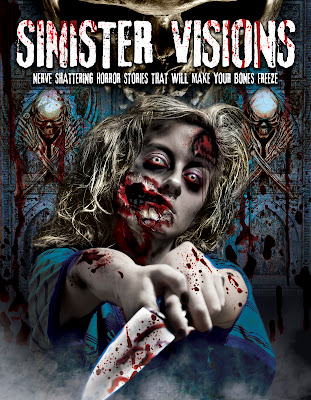 Sinister Visions is a horror anthology, I am quite partial to horror anthologies it has to be said. This one is made up of five different tales which are as follows:

Succubus - A young archaeologist on a dig in Syria uncovers something that will change her life forever.

My Undead Girlfriend - Keith wakes up to discover his girlfriend has become one of the walking dead on the day he is due to meet her parents for the first time.

Mother Knows Best - Carl is preparing for a date with his childhood sweetheart but his dominating mother is not pleased about this.

A Woman Scorned - A woman has been captured by her boyfriends crazy ex wife.

Genital Genocide - A serial killer about to be executed tells the watching audience of his crimes.

These do have the potential to be interesting, the good thing about anthologies is that if you don't like a story then there is plenty more that could be good.

Sinister Visions is a collaboration between film-makers from the UK, America, Sweden, and Denmark, the process of many writers and directed by Henric Brandt, Doug Gehl, and Kim Sonderholm (who did the weird Little Big Boy: The Rise and Fall of Jimmy Duncan). Cinema showings are planned for Summer in the UK, Spain, and Italy, while a DVD release is planned for North America in Autumn. A trailer is currently in the works.
Posted by Daniel Simmonds at 13:48