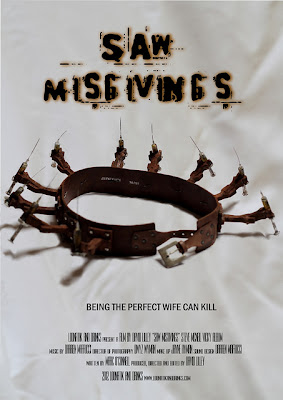 Saw Misgivings is a short horror comedy that is really a spoof of the Saw franchise (clues in the title).

A husband arrives home from work to find his wife Janey has managed to accidentally get a 'Saw' style head trap stuck on her. This is the least of her problems though as guests are soon to arrive and she hasn't finished preparing the dinner yet!

Saw Misgivings works as a comedy mostly through how little of an issue the head trap is seen by the couple, the husband barely reacting to the device, while the wife has tried to carry on her day as best as she could; going shopping, getting her make-up done, and even buying a belt to try and accessorise with the trap. Their are quite a few nods to Saw, best being where they silently consider how to get the head traps key out their  baby (who had swallowed it earlier). At times it does seem a bit too sure of how funny it is being but this didn't affect my enjoyment of it. 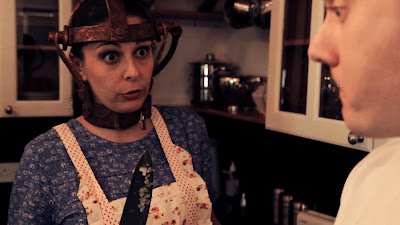 There is horror here for sure, mostly for joke purposes but still if pushed ever so slightly this could have had a real sense of menace behind it. I kept thinking if there had been distorted music, and weird lighting effects this would have been perfect as a Jam sketch (darkly surreal Chris Morris sketch show), not that this was needed.

For what this is it is ideal, it can't possibly outstay its welcome being under seven minutes in length, is fun and mostly succeeds. Saw Misgivings has been shown at a variety of film festivals and was even nominated for the 2012 Melies d'argent award. Be sure to check it out on Vimeo.

Posted by Daniel Simmonds at 15:05