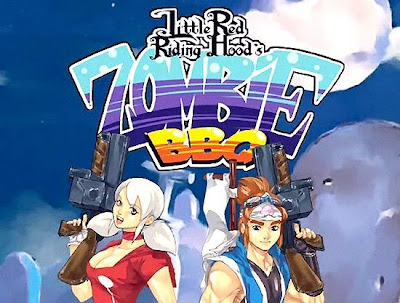 I never got a Nintendo DSi but luckily the DSiWare shop is also available on the Nintendo 3DS which I did get (and embarrassingly enough can afford no games for). Thanks to the DSi shop I was able to get this game that I had had my eye on since I first saw it announced.  Little Red Riding Hood's Zombie BBQ is an on rails shooter set in the land of fairy tales.

Zombie apocalypse has came to the world that Little Red Riding Hood lives in. After discovering her grandmother has become a zombie in this land of the undead she sets out with Momotaro (a Japanese hero) to try and find out what the cause of the uprising is and to stop it. 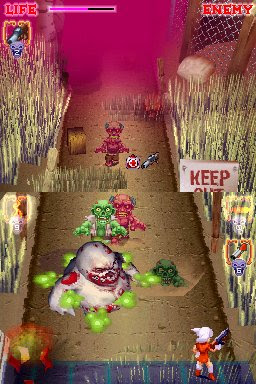 Marvel Zombies was a fantastic book that took the superheroes and villains and changed them all into zombies. Zombie BBQ does the same but with fairy tale characters. Each of the 6 levels take place in a different location (each level is made up of two stages and a boss fight). Fighting through Hansel and Gretel's village, Sleeping Beauty's Castle, Santa's workshop and more, all warped and mutated by the zombie plague. As you progress up the screen zombies rise up out of the ground and head towards you, they are quite chunky looking and are satisfying to fight as they loose arms and eventually their heads to your machine gun fire. Little Red Riding Hood is an expert of firearms in this world. For the most part you use the machine gun but you can also get power ups that give you limited access to a shotgun, laser, and a flame thrower, as well as grenades. Many of the enemies shoot projectiles at you (such as fireballs and vomit) which you must avoid by tapping the screen with the stylus. The game is mostly controlled with the stylus, the face buttons just used to move your chosen character left or right.

There are a large variety of enemy types, as well as the vast assortment of normal zombies you get ones that swell up as you shoot them, eventually exploding, ones that can only be killed by shooting their exposed heart or brain, skeletons that throw bones at you, Japanese spooky girl ghosts (think The Ring), robots and a load more. Special mention goes to the bosses; a zombie Gretel attacking you with her brothers severed leg, zombie Santa on his sleigh throwing exploding presents at you, and my favourite a giant screen filling zombified, cyborg Pinocchio. All the bosses are old school in that you must analyse their attack patterns, can be challenging to fight. 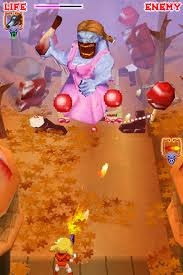 The problem with the game comes down to it's sometimes dodgy controls. Switching to your alternate weapons is never easy, often getting hit while messing around trying to select them. Grenades were one hundred percent accidentally used by me, I just never knew just what caused them to work. The alt weapons are mostly short range, more long range super weapons would have been welcome as the machine gun is a very weak gun to have to use for most the game. To get the true ending you are told to play on Hard once Normal is completed...I was not impressed, thank God for YouTube!

Not a bad little game, just let down by a few unfair control issues that really should have been sorted out. Inventive and makes you want to see what comes up next, just a bit boring at times. A good use of the duel screen though, really gives you a far view of what is upcoming as you scroll towards the levels end.