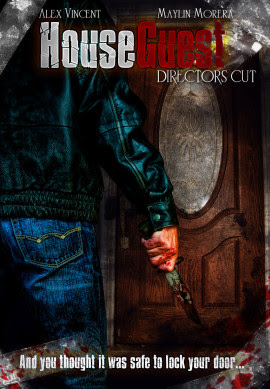 House Guest is directed by Jake Jalbert, produced by Brian Jalbert, and written by and starring Alex Vincent in his first starring role in 20 years (child star of the excellent Child's Play 1 and 2).

With a violent murderer on the loose in the city a group of friends decide to have a night of fun locked in at home. It just so happens one of the guests they invite in happens to be the killer the Police are hunting for.

Described as a tense thriller House Guest could potentially be interesting. It is always hard to judge by trailers as to the quality of the film, the trailer for Home Guest is no exception as it did seem a bit bland in all honesty. Still I make it a rule never to judge a film until I have actually seen it so will keep an eye out for this one.

House Guest is due out on DVD sometime in October/November this year, below is the 1st official trailer for the film...

Posted by Daniel Simmonds at 07:22