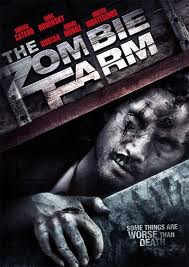 The Zombie Farm is a Latino zombie film that seems to be quite low budget (judging by the bad quality look of the thing). The tag line for the film is 'some things are worse than death', having seen this film I am inclined to agree.

Ana; a young woman unable to stand her husbands abuse turns to a voodoo priestess for help. She is given a potion to give to her husband. Meanwhile a film maker approaches a kind hearted con artist; Roque (the best role, played by Roberto Montesinos) with the aim to make a documentary about his work. Having discovered the potion has made her husband into an undead ghoul Ana calls on Roque for help (she had met him earlier in the film). Dragged into her conflict he, Ana, and the film maker Pilar set out to discover just what is going on. 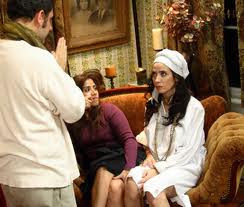 My God this film takes a long time to get going, I actually did some timings on this. The first 34 minutes mostly follow Ana and Roque, it seems it is just there to show Roque as a lovable rogue rather than a conman. 34 minutes into the film the first zombie is seen and is promptly shot straight through the brain...but this doesn't stop the zombie who hunts Ana and her new friends like a rotting version of the Terminator. It seems the Voodoo Priestess is actually kinda evil, she (spoiler) uses her zombie slaves to work on a farm (hence the films title) for cheap labour.  If your looking for proper corpse action then skip ahead to 65 minutes where for the first time more than one zombie is shown on screen at a time and some acceptable action is given.

The Zombie Farm breaks the cardinal rule of films; if your film is boring people are not going to want to watch it. I must say I was tempted to turn it off as my yawns were increasing at a dangerous rate. The Terminator zombie may look stupid but that is nothing compared to the Voodoo Priestess's bodyguard one who appears to be the reanimated corpse of a Chinese mime, dressed head to toe in white, and with white face paint it is hilariously bad. 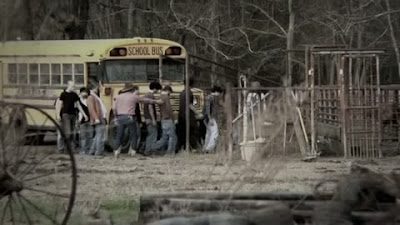 The film is mostly made up of a Latino cast, apparently it was released in both Spanish and English versions. It tries to explore the plight of the Latino people living in America but this is very ham-fisted with Roque going on long conversations with Pilar that seem to have nothing at all to do with what is actually going on. The use of zombies as cheap labour could be contrasted with the use of immigrants in America to do cheap labour. As a side note Roque's trademark catchphrase of 'Yabba Dabba Do!' is just plain embarrassing and is over used.

Things The Zombie Farm do right? It has a great soundtrack, all acoustic guitars, quite mellow. Despite far too much screen time Roque is a very likable character, steals all his scenes, not that that is hard with the people he is working with. The last 20 minutes are kinda entertaining, some typical zombie shenanigans with a cool resolution taking cues from Evil Dead. 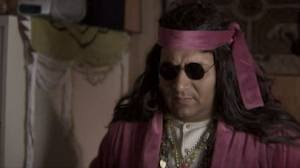 Far too boring to be worth your time. If you must see this and can get it cheap then I do recommend just skipping forward to an hour in and watching it from there.

Posted by Daniel Simmonds at 12:34