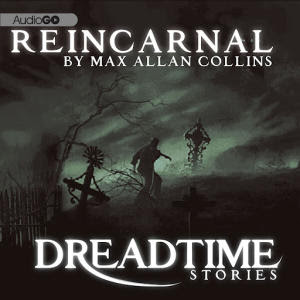 Reincarnal is the 4th of the 5 Dreadtime Stories I have got for review. This one as the title suggests deals with the theme of reincarnation.

During a hipster gathering Nora is hypnotised and regressed back to a past life where she witnesses her apparent past self being butchered by a creepy looking thin man. Back in the present she at first thinks it meant nothing, and that it was her subconscious mind creating fantasy, but then she starts having horrific nightmares about people getting killed by the same thin man. She discovers she is seeing the victims of a serial killer returned after 30 years. Using her psychic connection to the killer she works with a reporter to try and find and stop the depraved man.

Like the other tales before it there is a sense of creeping dread throughout, all the previous tales have ended with a twist ending so I was expecting this to be no different. I really quite liked the main character of Nora so wanted her to prevail against her Seven style killer. For what little actual time the killer gets his character still manages to have a fearful presence. One thing I would have to say is that the actors who play the 1980's victims do not do that great a job, sound very hammy. The plot is quite basic but never gets boring.

Malcolm McDowell again gives a fantastic narration, as I always say his voice does wonders for the quality of the play as do the many fantastic sound effects used. Another good Dreadtime Story. Like the others it costs under £1 and you get over 40 minutes of story. It can be brought from Audio Go.