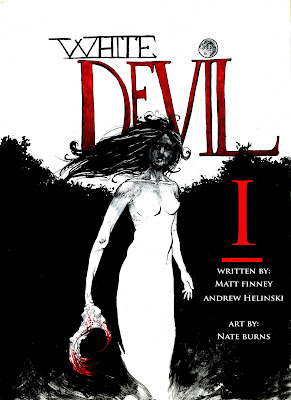 As mentioned in previous posts it is my sincere intention to catch up with all the outstanding posts I need to be doing on my blog.  Now back in July last year (cannot believe it has been that long!) I received issue 1 of a new horror comic called White Devil written by Matt Evans and Andrew Helinski. Arriving stylishly late here is my review of issue 1 of what is to be a 4 part series.

On the surface Judy appears to a normal American housewife. She lives in a quiet town, married to a wonderful husband with two beautiful children. Things should be perfect for her yet there is something missing in her life that has led her to pursue strange hobbies.  Under the pretence of going to book club with her best friend Betty they instead go to woodland meetings where under the guidance of a unholy priest they perform black mass with other regular townsfolk. Seen as something to bring a little excitement to their lives they don't really believe in the devil worship, but it seems that something is listening from within the void, something which has been summoned to the world by the groups actions. 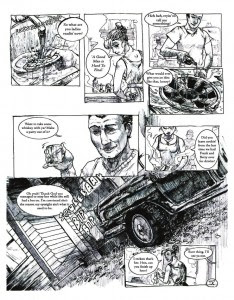 Being an indie comic I was quite excited to read this. They often seem to have the best ideas and less likely to stay to rigid story structures. What first drew me in was the art style. Art is by Nate Burns, it's black and white, ink drawings that have character to them, sometimes with the more indie comics characters can all seem to look the same, was good to see here they are all distinct and have a charm to them in the way they are both cartoony, and also realistic in proportions. A slight issue with some of the flowery text being a bit hard to read, squinting a bit I could make it out though so not a giant problem!

Issue 1 sets up the story for what is to follow in later issues so horror wise there is not a lot here. That isn't to say it is boring though, told from the perspective of Judy it gives good insight into just why she has ended up doing such strange activities. The black mass is an expected mass of ugly bodies grinding together but the meeting culminates with the arrival of a horror. Will be interesting to see where it goes from here and if it succeeds in being creepy.

A solid start to the series and it sets things up nicely so as an introduction it works. If you feel like checking it out issue 1 can be viewed on the White Devil website: here.

Posted by Daniel Simmonds at 09:41