Well now, this is one strange film, I don't really know what to make of it. Citing Mystery Science Theater 3000 as an inspiration this follows the same format. A cheesy horror film is what you are watching but it has a humorous commentary playing over it of two Scottish friends also watching the film and taking the mick out of it.

The film within a film is called Sacrificed, filmed in Edinburgh, it's a story about a woman who buys a strange dagger that comes with a statue. As soon as she gets hold of the two objects she seems to become possessed for as soon as she returns to her flat she stabs to death her creepy landlord. Around a year later and she has married a rich man (seemingly for his money). The husband is suspicious of his wife and has hired a detective to find out what she does with her spare time. One evening the woman invites a load of her friends to her mansion with (I can only assume) the sole intent of creating more sacrifices to the strange God she seems to be possessed by. 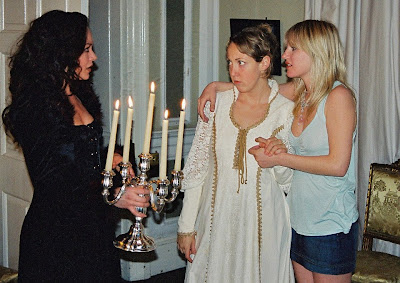 Meanwhile also watching Sacrificed are two Scottish men, they have got a bootleg of the film, something which they say they often do. They comment on the film making jokes of the acting and plot as if they were watching it alone, not for the benefit of an audience.

Taken on it's own Sacrificed would be a terrible film I think. It has lots of terrible acting, nonsense plot points and dodgy camera action and effects. The film does feature zombies which I enjoyed seeing and has some fun violent scenes (a woman taking a bath puts two cucumber slices over her eyes and then is suddenly stabbed through both eyes with a pair of chopsticks was a highlight). Overall though the film was a bit of a confusing mess. 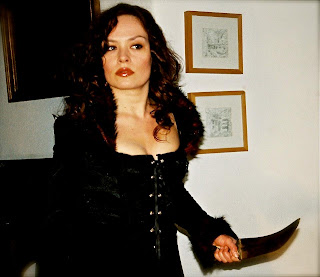 On the one hand adding a comedy commentary is a good move, the two men sound like friends and there is something warming about them casually talking over the film, it felt like I was watching the film with them. For the most part what they are saying is not important, or funny but it is relaxing. A few occasions I did laugh out loud at their comments but a few too many times they just descend into raw sexism, objectifying the many female actresses. This is all in their character of course and felt natural they would do that but it did get a bit stale. I found they were at their best when they go off on tangents that has nothing to do with the film, such as when they discuss their favourite horror films, more things like that would have been good.

The problem is really that it falls into the same trap as Mystery Science Theater 3000 in that sometimes the talking over the film really gets in the way of the film, times where I wanted to hear what characters where saying was made impossible by the men drowning out the film. I realise as I said that if I had seen the film on it's own I would not have been impressed though it has that certain feeling of it being so bad it's good almost.

As a horror experience The Download Horror is not that great, as a comedy it doesn't really hit, but strangely it felt like I was in company while watching the film which was a good novelty.