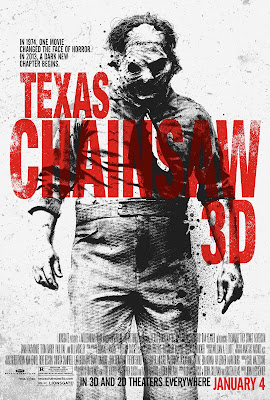 I have just gotten back from seeing Texas Chainsaw 3D. I had seen the trailer but had it in my head that this was yet another re-make. Surprisingly it is actually a direct sequel to the 1974 original cult classic.

Texas Chainsaw 3D starts off directly after the events of The Texas Chainsaw Massacre. The surviving girl has altered the police who send a lone officer to the house of freaks. Calming the family down it seems like they are going to give up Leatherface to the officer but this peace is shattered when a band of vigilante rednecks show up. They shoot up the house, then torch it for good measure apparently killing everyone inside...everyone except a baby girl who is rescued by one of the rednecks. Skip forward to 2012 and teen Heather receives a letter that says her aunt has passed away and left her her estate. Discovering she was adopted she heads to Texas with some friends to find out about her real family. Turns out her aunts house still has someone living in it, someone believed dead,  who wears a mask made out of human skin and is quite the chainsaw expert... 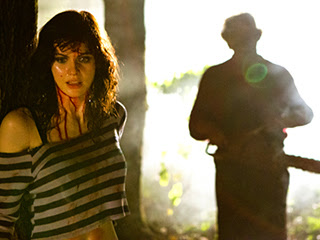 There are so many ridiculous flaws, plot holes, and generic beats that it is hard to really think this film is any good. For starters Heather (played by attractive Alexandra Daddario) is a teen, yet the film takes place nearly 40 years from when she was found as a baby...hmm.  Next up in the heap of inconsistencies are the many generic teen slasher tropes that just make you want to scream.  Upon arriving at the mansion where Leatherface resides Heather is handed a letter and urged to read it ASAP yet it is only towards the films end she bothers to open it which would have saved a hell of a lot of trouble. Couples cheat on each other, people give out hokey one liners before doing 'bad ass' things, characters do that all too pathetic thing of getting over the death of loved ones super quickly, talking of which...

Some plot spoilers here. Basically for the first half of the film it is Heather and her friends being chased around by Leatherface and butchered left, right, and centre. A halfway plot twist reveals that the leaders of the small town the film takes place in are actually the same rednecks who butchered the cannibals at the films start and want Heather dead leading her to team up with Leatherface. Now he had killed her boyfriend, best friend, and others hours earlier but she seems to just forget all that and spins on a dime to join the dark side. 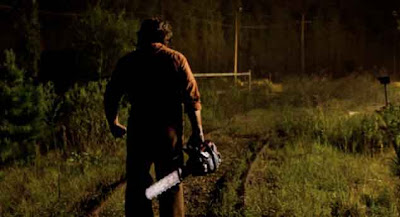 Leatherface is lost as a character here. Your made to feel sympathy for him yet he is a monster, his family deserved to die. Sure the Police and Mayor are bad people but they did do the right thing in my opinion so being expected to see what they did as a travesty of justice is plain stupid. The character of Heather is played so lamely that it is hard to even see her as a real person, just a empty character.

The 3D is what you would expect, lots of chainsaws being stuck out into the audience, as well as splatters of blood.  There is quite a bit of gore, mostly people having hands, fingers, feet etc sliced off. What the film lacks is pacing, it feels like two different films patched together, neither one is scary, or even creepy. Leatherface is a beast but just has no impact. There are good scenes here but are few and far between thanks to it so hard trying to be a teen slasher. Would probably say the first five minutes are the best recreating the 70's classic end in 3D was quite cool. 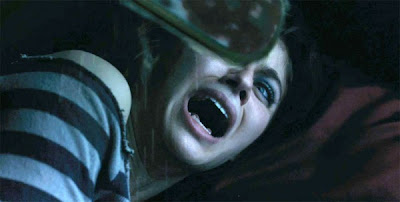 I enjoyed the film, it is just a shame that it lacks the chills of the first one, lacks the madness and is just muted.  Adding on an extra Rotting Zombie head for Alexandra being a nice piece of eye candy.  You may have noticed I have changed my rating system to out of 10. This was due to everything I reviewed getting a 3 all the time!