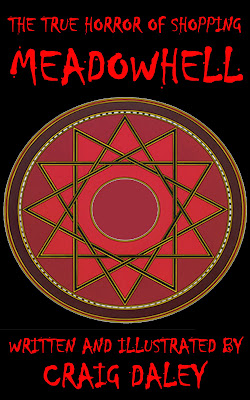 Meadowhell is the first of Daley's surreal murder mystery graphic novels. They start off with an introduction saying that all the clues are contained in the story so that you can work out what has occurred yourself. I tried, I really did but was very off the mark.

Meadowhell is set in 1990 at the Meadowhall shopping centre. A few days before it is set to open to the public three security guards are found dead, very dead as they are just skeletons. The blood of the three guards is spread far and wide all over the centre with no apparent murder weapon, motive or real suspects. D.C.I Bramley (an expert in solving strange cases) is called in to investigate. As he delves deeper into the case the questions just keep on coming. Could it be part of a ritual? a gangland killing? or something far more strange and surreal? 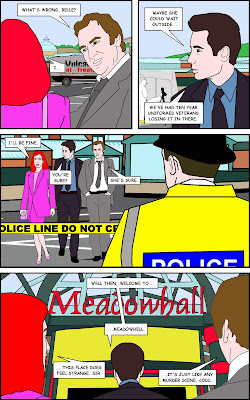 Daley always shows a real obsessive amount of detail in his work, he is no exception. Meadowhall is a real shopping centre (again set in Sheffield like most his work), and is actually nicknamed Meadowhell due to the large crowds that shop there. So much work goes into giving a realistic bend to his comics that it really sets them apart from others which just do not have the same level of crazy detail.

As always I must mention the frankly bizarre art style used, it stands out like 1950's pop art, bright colours, odd looking humans and a sometimes confusing panel layout all gives it a real charm. The art style is at times playful, especially when it covers real life people such as the presenters of GMTV shown here. I don't think it is coincidence that two of the main characters D.I Sutton and Bramley's assistant Belle resemble Mulder and Scully from the X-Files.

Most of what happens is detective work, Bramley speaking to witnesses and professionals to try and piece together what has occurred and who is responsible. Some real bizarre ideas are put through, such as when the D.C.I talks to a scientist about how the skin got so cleanly removed from the bones of the victims, at times it seems characters do leap to silly explanations far too quickly.  I never guessed what was really going on, when I found out I was surprised, very clever once again and going back you can see a ridiculous amount of clues littering the comic which unless you are insane you would just never pick up on.

An interesting read, more than his other work I was really drawn into this world, desperate to find out just what was going on. Meadowhell and Daley's other comics can be purchased at a variety of places on the internet including Drive-Thru, Smashwords and on Kindle.