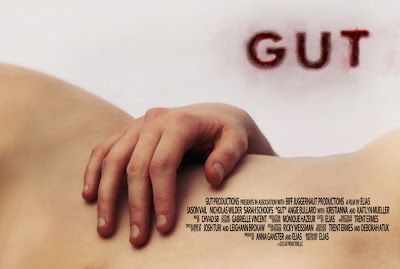 Well I have just finished watching Gut. My new years resolution was to get more up to date with my blog. Gut is an American thriller that has almost an art house feel to it.

Jason Vail stars as Tom; an everyday American man with a wife and child and a normal 9 to 5 office job. He has started to get disillusioned with his life, to his friends and his family he has started to become increasingly distant and lost. Something is missing. Best friend; geeky,  horror film obsessive Dan (Nicholas Wilder) introduces Tom one night to a strange DVD he received at his P.O box that appears to show a woman being sliced open. Repulsed and fascinated by what he sees Tom becomes obsessed, dreaming and hallucinating about it as it takes over his life. While Tom becomes more and more distant and erratic Dan is the opposite, he becomes more confident and reckless. More DVD's turn up, each showing a similar scene but it all becomes too real when Dan discovers a new film in his box, one starring someone he knows...It seems whoever created the films is now out to get Tom and Dan for reasons unknown putting them and everyone they know at risk.

This is a really bleak, miserable film it has to be said. Not helped by the very effective droning soundtrack that just creates a sense of creepiness and unease that gets under your skin. It looks like it had a very low budget, there are only really four locations used (the office, a diner, Dan's house, and Tom's house), all of which are all dull and dank looking. Tom is not likable, coming across as depressed and without aim, as the film progresses his relationship with his wife deteriorates visibly to the point where he can't even bare to look at her. He doesn't know what is missing. Meanwhile his relationship with long time best friend Dan also gets rocked. Dan seems unhappy that he doesn't get to hang out much anymore with Tom now he has a wife and child, this coupled with the Tom's secret plans to move across the country lead to the fracturing of the two men, trying to hold onto what little friendship they have left.

The DVD's they watch seem to have almost a supernatural power to them. Both drawn to the almost erotic violence it gives out. The hand slicing open female victims bodies almost lovingly creates a sense of unreality that seems to enthral the men.  One complaint I did have with the film is how drawn out and long some shots are. Scenes of Tom driving, laying in bed sweating etc just linger too long for no real reason. Having said that my favourite scene of the film was one of these. Tom's wife is laying in bed facing the camera, then Tom in the background gets into bed, her eyes are open like she is hoping Tom will give her some affection. Suddenly he reaches over to her...to switch off the bedside light. A sad scene that was oddly effective. 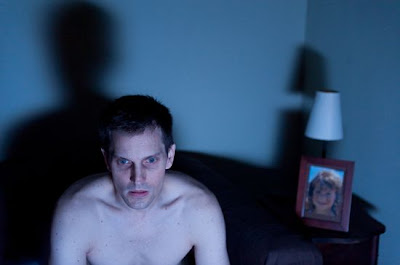 The plot was too drawn out, the twists were pleasing if not too surprising. Overall I got a real sense of unease from watching this. I was half expecting the film to cut away to footage of someone I love being cut open, now that would have been truly shocking! If you have the patience to see it through it is worth the journey, an unsettling voyage indeed and one that leaves you with lots of questions.