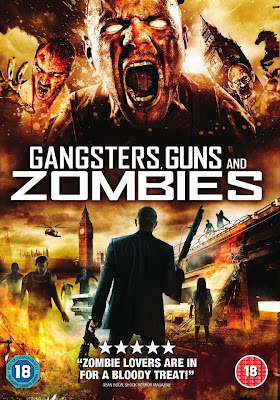 This film was the highlight of my time at Zombiefest 2012. The title alone was enough to put me off, it sounded like it would be a terrible low budget mess. It turns out that it could quite possibly be the funniest zombie film I have ever seen. Has to be said first of all that it is another terrible zombie film cover. I really must do a blog post about them some day as there are at least 7 or 8 films that have come out in the last few years that have pretty much the exact same cover.

Gangsters, Guns and Zombies takes place during a British zombie outbreak. For the most part normal life is continuing despite zombies everywhere. Taking advantage of this disaster a bunch of gangsters rob a bank.  The film starts with the gang in their getaway van on the way to their safe house. One of the gang has been shot, it is the getaway drivers first time and the Sat Nav is playing up. Finding the safe house swarming with Police the gang's boss Tony (played by Huggy Leaver like Brick Top from Snatch) decides to get his boys to head to a second safe house, one far, far away by the coast.  As the crew road trip across the country though it becomes more and more apparent that the zombie outbreak isn't just a flash in the pan, it could actually be the beginning of the end for mankind. 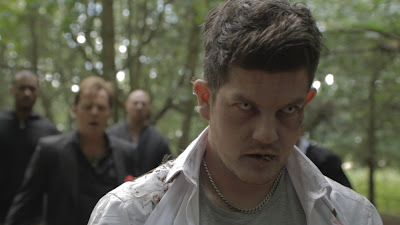 This film is hilarious, despite the low budget it really is the funniest zombie film I have ever had the joy of seeing, even better than the heavy hitter Shaun of the Dead.  This is down to the main cast of characters whose reactions, and actions in the world are a combination of a witty script and perfect comic timing. There are so many laugh out loud moments in the film that it is hard to really pick just one to demonstrate the fantastic humour embedded deep within the adventure.

So many memorable scenes spring to mind, even though it is around two months since seeing the film (yeah, I kind of should have gotten to reviewing this a tad bit sooner) so much stuff sticks in my mind.  One scene has the gang taking their injured friend to hospital. They all scurry out the van carrying the guy between them, telling the driver they will return soon. Then cuts to the next scene, the gang all carrying the man in the exact same way but instead charging out the hospital back to the safety of the van as hordes of zombie nurses and Dr's pursue them, the description does not do it justice.  Another wonderfully done scene has someone dying, you see him in the afterlife walking through cornfields in a beautifully lit, sunny paradise, then it abruptly cuts to the real world where his body is unceremoniously being dumped into a shallow grave, very funny contrasts. 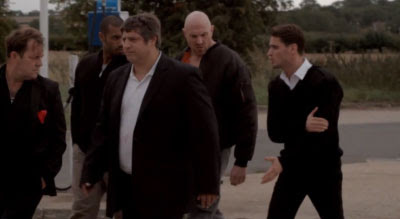 Despite being criminals you really do root for the gang, they are dim, bumbling, and harmless (giant, tough guy 'Muscles' played by Charlie Rawes has such an innocent outlook and comes out with such stupid lines that he became my very favourite character). It can be hard to make you care about characters in zombie films but here you really do. The whole final scene had me near holding my breath with concern for the gangs safety.

It's not all perfect, it is a low budget film and it really does show in places. Zombie make up is very bad, and one transformation sequence in particular had some very bad effects used.  A lot of the time the film has groups of similarly dressed zombies appear, one sequence has a bunch of zombie clowns appear, while an all girls zombie football team, zombie historical re-enactment group and others also appear. Groups like this appear just one too many times to appear natural. It could also be said that the films main character 'Q' (Vincent Jerome) is just a bit too plain, compared to the oddballs he is working with he does seem a bit too straight and normal. Less said about his love interest the better as she in particular just feels added in to tick a box. 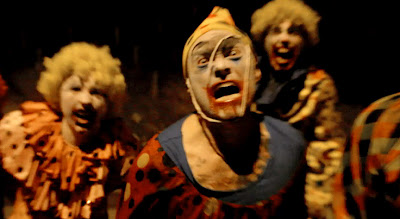 I am not doing a good job at championing this film, it is an essential viewing if you have any care at all for zombies or comedy, I cannot wait to get to own this, is sure to become one of my all time favourite films I am sure! Don't let the low budget, and sometimes awful CGI and effects put you off.

Posted by Daniel Simmonds at 13:19