I have just played through three demos of games that are out, or are out soon and thought I would give my thoughts based on what I played. Despite what I may say about these I know at some point or other I will be getting them all. 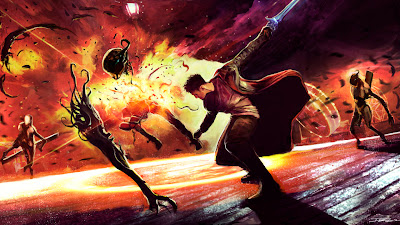 Painful title aside this was the best of the bunch.  I have never gotten on with the Devil May Cry games. I excitedly brought the first one as not only was it getting rave reviews everywhere but it was actually adapted from an early attempt to create Resident Evil 4.  I soon discovered a game that was simply far too hard for me on normal, I just could not progress very far at all. The next difficulty down; easy was very boring as not only did it make the game ridiculously easy but it also removed a lot of the cool boss fights that appeared in the other difficulties.

Ninja Theory have taken on this game, created as a reboot for the series. It is pretty awesome. The first part of the demo has you in a European feeling town. Playing as Dante the demon hunter you travel into the demon dimension version of the town that basically screws with the architecture Inception style giving some cool looking geometry. It seems you have access to a lot of weapons at once, was fun in a Bayonetta way fighting the demons, rather than the hand aching DMC of old. It ended with a fantastic journey through a morphed church with the level constantly stretching into the distance with a great looking effect.

The 2nd part of the demo was a boss fight against a very ugly giant, foul mouthed insect demon. The dialogue through this fight was real fun and the ease with which you beat up the strange creature gave a sense of empowerment.  I want this game, before the demo I had little interest in it. 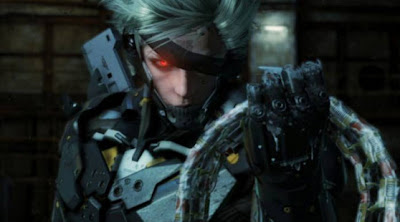 Rising takes place about 5 years after the (probably) convoluted events of Metal Gear Solid 4.  You play as Raiden who is very much a cyborg after he seems to have lost most his body. Armed with a sword that can cut though most objects (cars, bridges, humans, and even watermelons) you fight your way through an old town. As expected with a Metal Gear game there is lots of cut scenes and exposition. It feels like it is near the start of the game due to the amount of interruptions you get, and the sparsely populated level. After fighting a bunch of cyborgs and leaping robots you get into a boss fight against a robot dog that has a chainsaw for a tail. After working out how to parry I quickly dispatched this nuisance and the demo ended.   It was fun enough but didn't really feel like anything special, will keep my eye out for the reviews to see how it holds up. 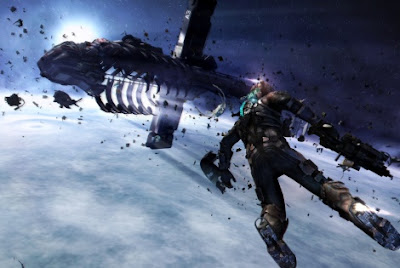 I entered this demo full of concern seeing as I have heard nothing but bad things about this game due to it pandering to the casual market and trying to stamp out any remains of horror. You get a choice of co-op or single player, of course I chose single player as I am never going to play the game in co-op. I have no desire to, and I have no actual person I would ever play it with.

As Issac you work your way though a snowy mountainous region of some planet you have crash landed on. The outdoor locations look great, very wide open in appearance (though did seem to be relegated to narrow mountain paths). Necromorphs made a welcome return, this time decked out in The Thing style snow gear and bursting out of the snow rather than from vents. The Thing was such an inspiration for the series so I guess it makes sense for it to come full circle.  After a bit of exploring I came across the damn co-op character who thankfully disappeared rather than joined to fight alongside me. An uninspired boss battle against a large crab like monster followed which lasted a tad too long.

After this I encounted some human enemies. The necromorphs thankfully don't like the human bad guys either so each time I found some they were comically killed by the monsters.  A fight against a giant drill (!) then led me out to a cliff top where I actually got to fight some humans. Cover based mechanics just feel weird in a Dead Space game, something the monsters found as well as they would run up to my cover and then just constantly run against it powerless while I stood there shooting them to pieces. The demo ended with the appearance of a giant monster, hardly surprising.

While the demo did not get me any more excited for the game it was passable. The outdoor locations looked great, but the few indoor locations all looked quite bland and samey. I won't be getting this until it goes down in price.
Posted by Daniel Simmonds at 10:43