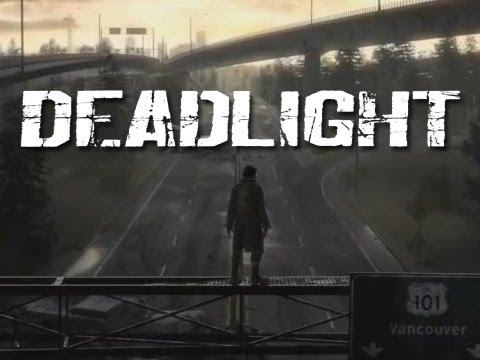 I have wanted Deadlight for a long time but early reviews  gave a mixed impression. Over Christmas it went half price on the X-Box store and so I snapped it up.  Deadlight is a 2D platform game in the vein of Another World or Flashback and features a unique visual style that puts everything in shadows.

The game takes place in Seattle in 1986 after zombie apocalypse has swept the world. You play as ex park ranger Randall Smith who is on a mission to locate his missing wife and child who he is convinced are still alive. The game begins with you being separated from your group of fellow survivors you have been travelling with. They all drive off in a van towards a location known as the "Safe Point"; a place said to be free from Shadows (what the humans have named the zombies) and where Randall thinks his family must be. Deciding to meet them later you head through the ruined streets to make your own way there.  Now we have all seen zombie films, and we all know there are no 'safe points'. Here as everywhere else humans are the real monsters... 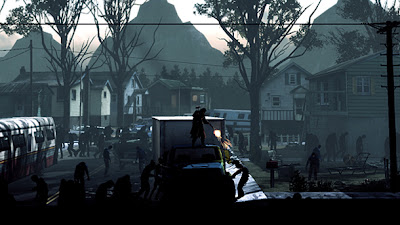 The game takes place over three chapters, each made up of around ten levels each. You for the most part head from left to right using a series of simple puzzles to both proceed through the ruins of civilisation and also to outwit the dumb Shadows who want to eat your flesh. Shadows can be tricked into walking off high ledges, getting electrocuted, having heavy objects dropped on them and more. For the most part Randall is weaponless. For portions of the game you get access to a fire axe that can break windows and locks, it can be used to hit the Shadows but is only worth doing that as a last resort as is all too easy to be dragged to the ground.  Later in the game you do get access to firearms, but ammo is never in a large enough supply that you can rest easy.

Now it has been a while since I played this, playing it just before Christmas last year so my memory is a bit fuzzy on some points. The plot is ok, nothing special, the flashbacks to the start of the apocalypse are well handled, though the ham fisted twist that is revealed at games end was very, very obvious. There may be spoilers ahead!  Hidden in levels are lost pages from Randall's diary as well as I.D cards for various dead humans. Interestingly all these I.D badges have the names of infamous serial killers, it is hinted that Randall himself may have been a serial killer pre-Armageddon, yet only hinted at, it is never denied or confirmed leaving an interesting grey area, but the badges as well as some odd diary entries certainly led me to think that. 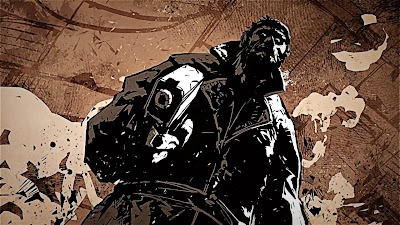 Randall is not a likable character, he's gruff, unfriendly and so set on his family that he doesn't really seem to care about anyone else (yet is still happy to go on fetch quests for them).  The first part of the game sees you traversing streets and warehouses. Part two sees you in a ridiculously elaborate sewer base that writings of the poet Dante found there elude to it being a recreation of Hell (fittingly with hanging bodies in the background and deadly traps everywhere).  The last section of the game sees you finally getting to 'Safe Point' and finding out the answer to everything.

At some points in the game you just have to run headlong, these are usually quite exciting as you have not only Shadows chasing you, but also walking out of the background and being ahead of you, so it is a mad race that gets the blood pumping. Later on there was quite an awesome chase that involved a helicopter gunship. A few of these sequences involve collapsing buildings where death is always near, these were not so good. 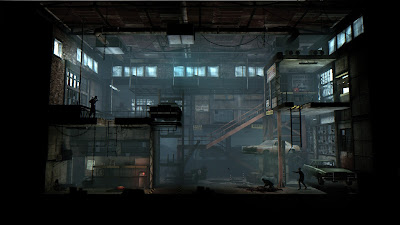 The game looks fantastic, backgrounds have a lot of movement to them and depth, giving the world a real feel. It does seem strange at times being stuck in 2D when the levels look so open. There is a lot of variety to the game, and frequent live comic book style cut scenes keep everything ticking along nicely. You will die a lot but checkpoints are very player friendly. I found it a blast to replay earlier levels, being able to charge through them without dying made the game look so wonderful and fun to play.

Really not a lot to say negative about this. I had a really fun time from start to finish completing it in two sittings. A zombie game with a difference.