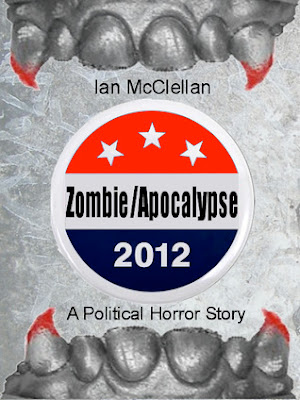 When I first heard of Zombie/Apocalypse 2012: A Political Horror Story I was a bit concerned that it was going to be a political essay using zombies as a metaphor for Americas political issues. Being English I have only a very basic grasp of what happens in the 'Land of the Free'. Thankfully the book is very easy to understand and far more of a story than I expected. Political issues are quite the same everywhere you go it seems.

Zombie/Apocalypse tells the tale of Lance; a middle aged man, set in his ways living in a small town when a zombie pandemic sweeps the globe eventually reaching him. It isn't long before he is bitten and with increasing symptoms he barricades himself in his basement and falls into a deep sleep. Several days later he awakes feeling a lot better, he realise that he may hold the cure to the zombie plague.  After a fruitless call to the C.D.C (centre for disease control) where his claims are ignored Lance decides the only thing to do is travel across zombie ravaged America with his best friend Larry to reach the C.D.C in Atlanta.

I wasn't prepared for how funny this book is, it is told from the perspective of Lance who is recounting his story, he is extremely sarcastic, often to his detriment, being able to infuriate and confuse everyone he comes across but also making the book a fun read. He is a great protagonist, he is not perfect and does some very questionable things, some that really surprised me. His thought process is usually the best way McCellan brings humour, a highlight that stuck in my mind was when he awakes from a sleep to see his friend Larry also asleep but in the drivers seat of a moving truck, it takes a whole paragraph before Lance realises what is wrong with that picture:

'Of course, I thought to myself, he probably shouldn't be sleeping
while he's driving. I then became very awake.'

Funny stuff. The character of Lance makes this book what it is, his observations, his outlook all make what is  your typical zombie tale into something better, as do the darkly humorous events (such as giving a deeply inspiring speech to a group of survivors only for them all to be ripped apart by zombies just minutes later).

Plot wise it is quite simple, having the feel of a road trip, being bounced from situation to situation so that there is never a lull in action, the zombies start off as a big threat but take a back seat to the evils of humanity, while later on once the undead have but lost their sting a newer threat is introduced to keep things thrilling.

So onto the political aspect now.  Mainly it concerns how bureaucracy and point scoring quickens the apocalypse. The whole adventure wouldn't even had needed to occur if Lance had been able to get past the useless rule following call centre operative from the C.D.C. Early news reports centre on politicians arguing over whose fault the outbreak is, and refusing to divert funds from other parts of the budget to deal with the uprising. The rich and famous are the ones rescued by the government while the common people are left to fend for themselves. Elsewhere you have pro-lifers and animal welfare people doing their best to get in the way (zombies get called 'life challenged Americans'). The ingrained ideals of America do nothing but fast track the doom of mankind.

I really enjoyed Zombie/Apocalypse 2012: A Political Horror Story (apart from that mouthful of a title), McCellan has an easy to read writing style that makes a zombie book that is hard to put down.