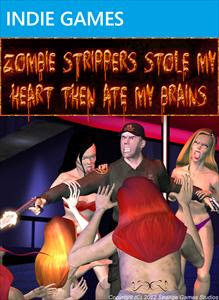 I rolled my eyes when I saw this game, surely here is everything that is wrong with the often (and mostly) terrible Indie channel on the 360.

As the intro story explains you are a security guard at a strippers convention where a zombie outbreak occurs.  Luckily there was due to be a gun convention in a few days time and so plenty of weapons and ammo are at the convention centre. For anyone's information the cover art may give the game a different title but I am going off of what it was named on the Indie channel. 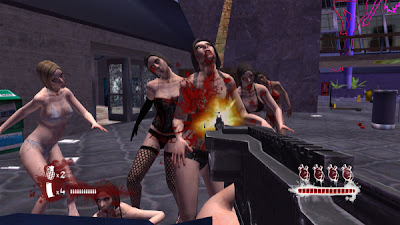 This actually kinda felt like a very, very low budget Dead Island. It is a first person wave based shooter but locations are tailored to look like places as opposed to the usual arena. I played 3 levels of the game. I have said before but I will say again; I have no problem reviewing demo's of games from the X-Box indie channel so there! I used to be in the mind set of buying any game I reviewed first but that left me with a lot of trash clogging up my hard drive.

Anyway the first level saw me protecting a guy who was fixing a lift, as did the 2nd level. The third level had me on a convention floor which had some nice touches such as real advertisements neatly arranged into the level so as to not stick out.  Zombies are all strippers, so many pasty looking bikini wearing lurching towards you. The 2nd level saw the introduction of slightly stronger zombies, while the third saw the arrival of legless ones who crawled along the floor trailing their entrails before them. One annoying factor is the rationing of bullets that is needed due to lengthy ammo re-spawning times. 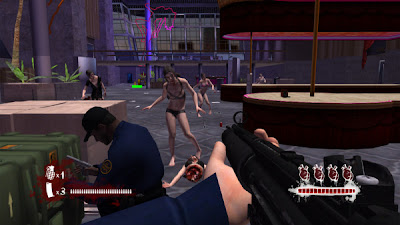 The game looks basic but controls ok, and I have seen far worse zombie animation. For 80 Microsoft points you can't go too wrong by taking a chance with this if you really need another value range zombie shooter.

Posted by Daniel Simmonds at 08:32

Thanks for taking time to review the game. I'm the developer and I'll adjust the amount of ammo in the upcoming update so bullet rationing is not an issue. After the 3rd level where you have a 2nd weapon, it's much less of an issue.

The problem with tuning a game is you play it so much over the development cycle that you lose your perspective on how hard things are.

Thanks for the comment, compared to a lot of the zombie X-Box Indie games it is really not bad