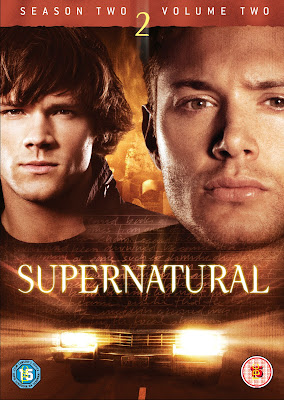 In the post today I had Season 4 of Supernatural arrive (fantastic from what I have seen!). This reminded me that I had yet to review Season 2. Minor spoilers ahead...

With their Dad dead the Winchester boys are even more determined to kill the yellow eyed demon that has been plaguing their lives. As Sam's psychic powers become more apparent he discovers that there are lots of other 'chosen' out there, people who were visited by the demon as children. Some of these are good, some evil, all with different abilities. The main story concerns Sam and Dean finding these people. The main plot is again much like season 1 not that great, the script writer even admitted it was not a good storyline, revolving around if Sam was going to go over to the 'dark side' or not. This was stupid as obviously he wouldn't as he is such a goody two shoes and has utterly no reason to join forces with the demons. 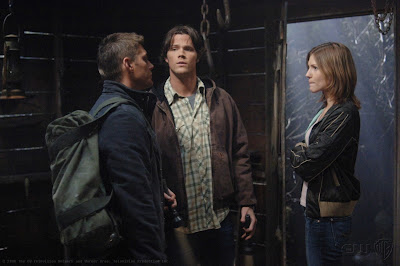 There is still a 'monster of the week' vibe going on here as well as the introduction of what are pretty much comedy episodes. By far my favourite storyline was the continuing persecution of Dean by the Police who are convinced he is a dangerous criminal. 'Nightshifter' in which the brothers get caught up in a hostage situation at a bank is one of the more epic episodes with a neat Leon twist to it while 'Folsom Prison Blues' sees them using their wanted status to advantage to investigate a ghost at a prison. The comedy episodes are a bit hit and miss with 'Hollywood Babylon' just stuffed with references to other films (mostly Evil Dead!) while 'Tall Tales' sees the arrival of the Trickster character and is quite a fun one. By far the best episode is 'Roadkill' about a young woman out in the woods being hunted by the ghost of a man killed in a hit and run accident, a surprisingly moving episode with a twist that blew me away!  The season finale is good, though part 1 was a bit boring but leads to another great ending. One thing Supernatural always seems to get right is its season ends.

Monster wise there are more vampire episodes as well as a werewolf one which is not that bad, but the inclusion of a zombie based episode is less good, in the supernatural universe zombies are kind of lame.  New characters are a mixed bag, Gordon Walker is a fantastic bad guy; a hunter who is convinced Sam is the Antichrist, he has all the skills and knowledge that the boys do. Most the good characters introduced are lame, the location of the Roadhouse which becomes kind of a HQ is not great for what is essentially a road trip series. Bobby is great though, a hunter who has the look of a lorry driver, he was not originally planned to be a key character but season 4 and he is still going strong, acting as a father figure to the boys. 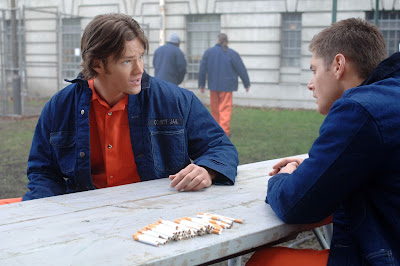 Another great season of a great show full of mostly good episode though the way that each episode a different issue is tackled is a bit badly handled. For instance for the duration of 'Houses of the Holy' Sam is suddenly revealed to be deeply religious and gets in many arguments with non religious Dean but just for the duration of the episode. This theme of tacked on issues seems to be a Supernatural constant which is a shame.