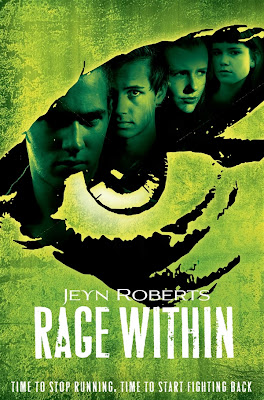 Rage Within is the sequel to Dark Inside; a book that I loved for its fast paced action and interesting chapter style. Much like that book it is written in such a way that once you start reading it is very hard to put down.

The first book was concerned with the four main characters (Clementine, Aries, Mason, and Michael) separate journeys across post apocalypse America. The sequel has them now all together, living in a safe house with other survivors in Vancouver. The city is infested with Baggers (the humans turned into sadistic crazed killers) who constantly patrol the streets in white vans, loud speakers promising sanctuary.  The sanctuary is actually a prison camp where hundreds of captives are kept in squalid conditions, forced to do slave labour. While scouting out the compound Mason and the mysterious Daniel are captured. Meanwhile at the University where Clementine hopes to find her missing brother Heath she and Michael discover a large group of survivors.

First off; this is not as good as Dark Inside. I loved the road trip feel of that first book, as well as the four characters all having their own mostly separate tales. Here it is much more intertwined, so you get instances of different chapters taking place in the exact same place but from different perspectives. The main story for this book didn't really seem to be based on a huge event, it felt like a side story almost, and it really got exciting towards the end but the lead up to it was nothing epic, just characters trying to survive in the world.

The Baggers are far more organised now, in Rage Within they were random crazies, but here they are united under a leader bringing with it a new type of horror albeit a more traditional type. For a book aimed at young adults there is again plenty of grim violence that looses none of its rawness such as an anecdote of someone being tortured by having their insides pulled out, to close combat brutal fighting between the survivors and the Baggers all great stuff.

What Rage Within does do well is drip feeding parts of the bigger story, as well as fill in the blanks from the previous book. The character of Daniel is made much more real, the 'Nothing' chapters are back and while it is no longer a secret who or what Nothing is they are still a welcome slice of madness to break up the plot. My favourite part of the book was actually the first 40 pages which are a variety of chapters that take place three weeks before the start of the destruction of mankind, it gives a great set up and some further background on the characters Roberts has created.

A whole heap of new characters are introduced, some great, some not so interesting, I wasn't pleased to see what has to be the worlds most annoying boy; Colin still going strong, why the group don't just tie him up and dump him somewhere is the real mystery of the series. The best new character I felt was Ryder though he had limited book time so never really got to shine, it seemed like he was mostly there as a contrast to the leadership methods of Aries. As with the first book I did find myself getting confused with the lesser characters who all seem to meld into one in my head sometimes.

Despite everything that happens there really is a message of hope in her books, something often missing in apocalypse tales, it stops things from becoming too bleak (though plenty of bad stuff still happens!). I really did love this book, it is yet another page turner that at the very least sets up events for the next book in the series and has some great, completely unexpected twists in it. Cannot wait to see what Roberts comes up with next in this riveting series.