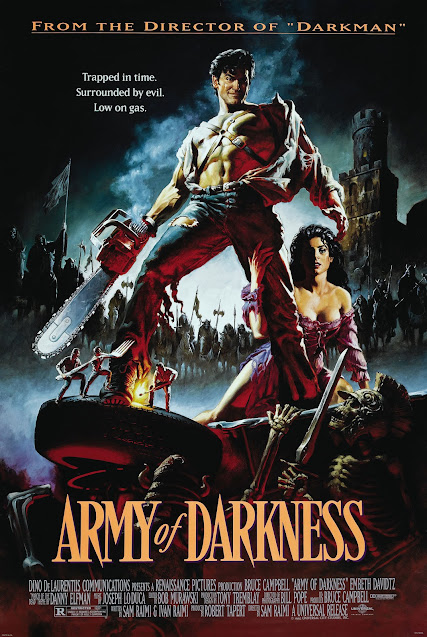 It is damn criminal that I have still not reviewed the Evil Dead trilogy, especially as they are some of my favourite horror films. Army of Darkness is the last film in the trilogy and does expect you to have seen the previous films so there will be some spoilers.

After accidentally being sucked through a magical portal at the end of Evil Dead II Ash (Bruce Campbell) finds himself transported to the 13th Century. At first captured, he proves his worth by defeating a Deadite (with the use of his iconic chainsaw hand and boomstick) and is proclaimed to be the hero foretold in legends who would appear to defeat the evil plaguing the land. Ash reluctantly accepts his quest to banish the evil not to save the people, but he is told the Necronomicon (book of the dead) is the only object able to get him back home to the 21st Century. 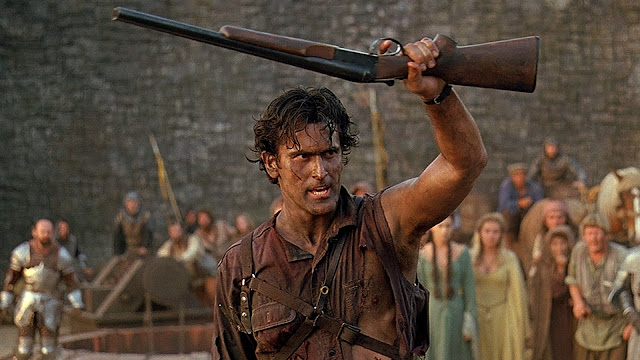 Bruce Campbell always played Ash as an anti hero; a coward forced into a hero's role, but in this film he also becomes supremely arrogant, thinking himself vastly superior to the 13th Century people he refers to as 'primates'. His arrogance is his downfall many times throughout the film and leads to many comic moments. The Evil Dead was a horror with comedy elements, Evil Dead II went far more comedic but once again was still horror. The same can't be said of Army of Darkness, it has turned into an adventure film, dropping an age rating as well to be a 15. Ash is full of classic one liners (the origin of the classic line 'Hail to the King baby!') and also full of slapstick comedy.

Army of Darkness looks like it has a very small budget, the 13th Century represented by deserts and woodlands while the main location of the castle is very rough looking. Blood is in far less abundance and looks somehow even more fake than the corn syrup of the previous Evil Dead films. Being a 15 there is far less violence, gun shots do no physical damage, most the enemies being fought consist of skeletons done in a stop motion Jason and the Argonauts fashion. 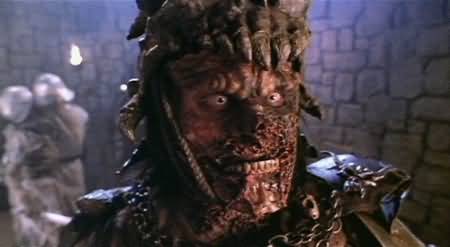 It has to be said, which I am sure any Evil Dead fan knows is that there are two endings. The original ending was deemed too depressing for the American audience and so a happy ending was also made. Both are so different from each other that they are both worth watching. I have always watched both endings when ever I watch this film

As the end of a trilogy it is a fantastic change of pace, as a stand alone film it is not that great though, it has gone just a little (ok, a lot) too comedic, Ash in this incarnation being almost a parody of himself. Still Bruce Campbell is fantastic as both Ash and Evil Ash (the films main villain), Sam Raimi's direction is superb once more. Army of Darkness is a fun, dumb film and it knows it.

Update 01/01/2021: While I have seen this plenty of times before this time it really clicked for me. It may have lost all the horror and the over the top violence of the previous entries but it really was quite funny.
Posted by Daniel Simmonds at 10:43