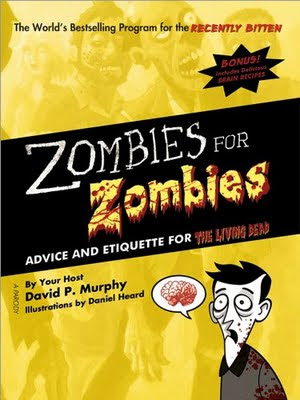 Zombies for Zombies is a parody of the many 'blah blah for dummies' books around. It is a 'comedy' book giving many many tips on how to cope with being dead.

The book is a guide that the recently bitten are advised to read in order to get into zombie care resorts. It exists in a world where zombie apocalypse has occurred, many areas of the world are sealed off by gigantic fences so that normal humans can carry on their daily lives.  In this world zombies are seen as 'post lifers' and treated with respect. At what I imagine must be great cost resorts have been created where zombies are cared for, fed, and entertained, though only ones who have followed the zombie for zombies program are eligible.

Man this book is lame! A one joke pony that just drags and drags and drags. The one joke is that the zombies are treated as humans still, given a variety of activities they can do such as zombie friendly sports, dances, and food. They are given their own TV shows to watch, songs to listen to. Hilarious. This whole thing is stretched out over a 200 page book that is awful to read.  Murphy seems quite taken with how funny he is and writes as if he is doing the funniest thing in the world when 95% of his terrible attempts at humour fall flat. Half his jokes involve putting 'TM' at the end of made up zombie aids, while he frequently makes pop culture references to what I imagine must be well know Americans, but who I had never heard of.

Interviews with people are all terribly done, his characters all come off as just cringe worthy, while his ramblings about zombie dress wear, and an ill advised chapter on zombie sex (a variety of zombie sex positions are discussed in details, not pleasant reading). The only good part of the book is an interlude that takes the form of a short zombie story. The illustrations of which there are many are done by Daniel Heard, are ok, they fit the style of writing well at least. The attempts at humour were just lost on me.

Posted by Daniel Simmonds at 08:05