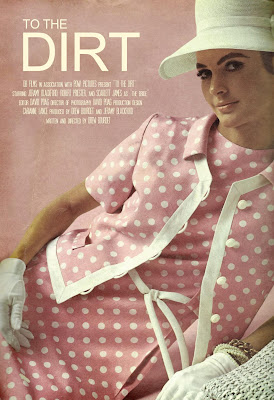 To The Dirt is a short film (23 minutes long) written and directed by Drew Bourdet. It stars Jeramy Blackford as Nate and Robert Prestor as Eli.

Nate and Eli are two hillbilly brothers living out on their own in the woods of America. Eli is a mute and retarded so is up to Nate to care for him. One day while out in the woods he discovers a corpse of a girl washed up on a river bank. Not wanting to leave the girl to rot he brings her body home.

My expectations for what this film would turn into were vastly wrong, I was expecting bad things to happen, I caught myself being prepared for twists which never came. This isn't a horror film in the traditional sense, it is sad, the loneliness of Nate with only his mute brother for company is really shown through the muted colours, the soundtrack and use of light and shade. Eli spends his days punching a straw man hung up by a shed, obviously with problems but Nate himself is shown to not be of sound mind either. Talking to the corpse he comes to befriend it in his mind. The lack of any sort of companionship is telling, from the pictures of females cut out of magazines stuck on his bedroom wall, to the way he wants the corpse to look pretty, even going as far as to stick plasters over the stab wounds on her chest; you get a real sense of his aching loneliness.

With these types of films the acting can really make or break the experience, here Blackford and Prestor both excel, Blackford having the only dialogue in the film, and being the main focus really shines giving a pathos to the character he portrays, you can't help but feel for him. Prestor on the other hand is perfectly cast as the childlike Eli.

To The Dirt is a poignant, sad and thoughtful film which takes a macabre plot and turns it on its head into something beautiful.  I am glad it defied my expectations, it would have been all too easy to go down a horror route.