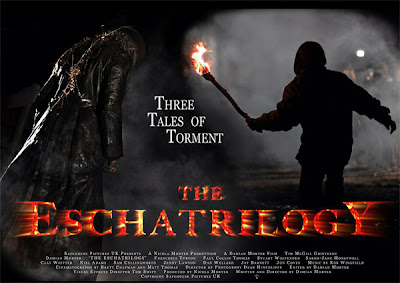 The first film I saw at Day of the Undead 2012 was The Eschatrilogy. At first I thought this was going to be 3 short films, but it is instead in a Tales from the Crypt style of one main story and three mini interconnecting ones.

An ancient evil awakens from the earth, with him comes zombie apocalypse, everywhere he goes the zombies follow. This supernatural terror will ensure no human escapes the ravage plague sweeping the lands. In this land a lone survivor is holding out in the mountains. A stranger appears, carrying with him a book that tells tales of the zombie apocalypse. One tale is of a zombified man searching for his daughter, one has a young man on a mission to get to his parents, the last is about a man who will do anything to protect his son. 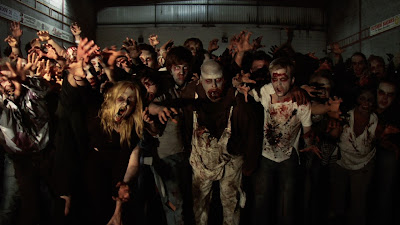 There are lots and lots of zombies in this film, around 700 I believe. The director Damien Morter stated how many of the cast were family and friends, and unfortunately it does show as some of the acting is truly terrible with people sounding like they are reading from a script they have never seen before. The child actors all do that hideous over acting technique thing where they over emphasize words and sound unnatural.

The zombies themselves are for the most part sparsly made up, this is a great thing, I don't know what it is about sloppily done zombies but I love it, makes it feel more like a proper zombie film, there are so many as well that the sense of being completely doomed runs rampant. Some great effects are used at times, in particular I remember when someone got their face pulled off (I think) which looked great. 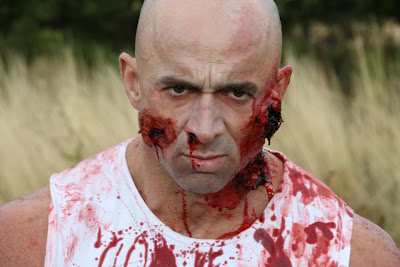 For a low budget film it really does look great, the directing is also very well done. The surviving humans all look scummy, a great choice of actors were used for these characters, not so much the main ones. The Dad in the third story was giving off a Swedish vibe for some reason which was off putting for a story set in Britain, while the large zombie obsessed with finding his daughter was kinda funny rather than tragic. The funniest character by far was some meat headed man whose son got killed after he failed to punch a horde to death. Believed dead he reappears later on covered in bite marks, ready to fight the hero of story 2, a very funny moment. The stories are interconnected but only really in the way that the same zombies keep showing up which fits with the supernatural cause of the outbreak

This is a hard one, I did really enjoy this film, there are many, many far worse zombie films, it's just that I never cared about the hero's of the film at all, I never rooted for them. I am not sure if the film is supposed to be serious or if it is an accidental comedy. For zombie action though there is a lot of fun to be had. I love the idea of a supernatural figure leading the undead, one who knows where any remaining survivors are and can find them where ever they hide.

The Eschatrilogy is definitely a zombie film you should see, it is a lot better than the Meat Markets, and other low budget films of that type. The acting may be wooden, the plot may be uninspired but it gets zombies right, hordes of shambling flesh hungry creeps are here in abundance and for that Morter should be commended.