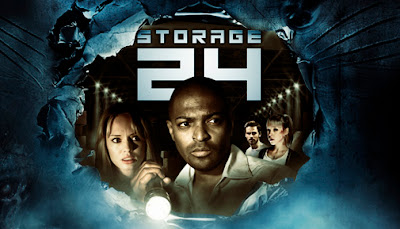 I must admit when I first heard of Storage 24 I paid it little attention; a sci-fi horror set in a storage warehouse? Surely a poorly made, low budgeted mess. Looking closer I saw first of all that it had came from the creator of cult films Kidulthood and Adulthood; Noel Clarke (who also stars). Next I saw that it actually had some great actors in it, my interest was gained and I sat down to give the film a go.

Storage 24 is a British sci-fi horror that takes place mostly in Battersea, London. A military aircraft has crashed in the area where a storage warehouse is located (funnily enough called 'Storage 24') The aftermath of the crash has caused the security system at the warehouse to go haywire, trapping in several people who happened to be there at the time. Unfortunately they are not alone, some kind of monstrous being has escaped from the wreckage of the aircraft and has decided the warehouse is to be its hunting ground... 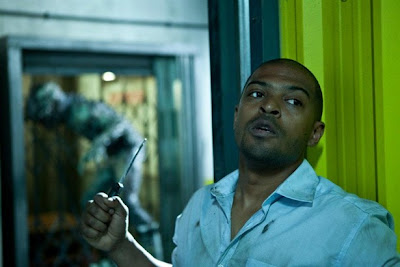 The plot is very simple; that of a monster stalking its prey, much in the vein of a warehouse based Predator, or Xtro but what makes this film special is the realism given to the few actors. These are normal people, not commando's or anyone with any kind of combat training.  Charlie (played by Noel Clarke of Doghouse fame) has recently split up with his girlfriend Shelley, he has headed to the storage unit, knowing his ex has arranged to go there hoping to confront her over the breakup, along with him is his best friend Mark (Colin O'Donoghue, star of last years The Rite). Charlie at first comes across as a highly strung loser, not likable at all. The interaction between him and his ex comes across as so believable though that you cant help but feel sorry for him. As the film progresses his character ark makes him into the hero of the piece, someone I was rooting for to win, really well handled. O'Donoghue on the other hand is disappointing here, his character turning into a stereotypical turncoat who does all he can to save his own skin while constantly putting the others in peril.

All in all there are around 9 characters in the film, of which there are 4 main ones, all the actors do fantastic jobs, yes O'Donoghue's character might be an awful horror stereotype but his acting is still done well. Without the group coming across as believable characters this film would have fallen flat, even the inclusion of comedy character David (Ned Dennehy) is done well. 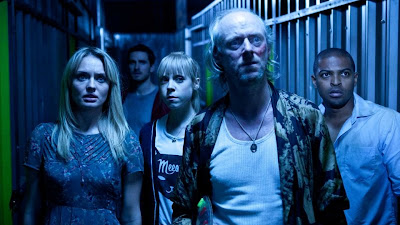 What of the Alien creature then? It looks utterly fantastic, I was expecting a mess of CGI, but what you get here is a being I can only describe as looking real (as much as an Alien can look real). First only glimpsed in pieces (as is the way with these films) it is a real threat, mostly due to the fact there just are not any weapons laying around for the humans to use on it. It seems to enjoy ripping off faces, and gore is used to good effect. I don't really want to spoil what it looks like, kinda like Predator crossed with the creature from Cloverfield. One plot device sees the characters looking for weapons in random storage lockers. I was completely expecting the group to miraculously come across one full of guns, so when Charlie finds a box with an AK47 on the side of it I rolled my eyes, until he gets it out and pulls the trigger to discover it's just a toy gun! A good way to play with audience expectations in which is otherwise quite a formulaic film.

The film doesn't do anything new, but it manages to make a 90 minute film about a group of people running round a bland storage warehouse into something that excites, and makes you really care about (some) of the characters. I loved this film, I never expected to, but I did, sometimes an old idea done well is all that is needed.  Storage 24 is out now on DVD, Blu-ray and to download, priced at £12.99 and £15.99 respectively  and containing over 90 minutes of extras. I never actually watched the extras (I never do)