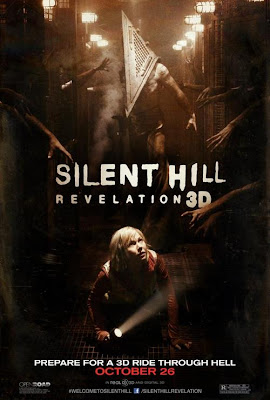 I still don't know if I actually like the first Silent Hill film, I tried to watch it again last night in readiness for the sequel but after 20 minutes I wandered off upstairs and totally forgot I had put it on. I have seen it about 8 times and still have no opinion on if I like it or not. Anyway, I figured I knew enough about the story to head into Revelation. As a side note I watched a 2D version of the film so am not calling it Silent Hill: Revelation 3D!

Revelation takes place around six years after the events of Silent Hill, finally clearing up that ambiguous ending. When Rose and Sharon escaped Silent Hill it turns out they hadn't, Rose used a magical seal to send Sharon back to the real world. Since then Sharon (now called Heather) and her Father (was Christopher, now called Harry) have constantly been on the run, going from town to town, being forever hunted. Heather thinks it is because her Father is wanted by the Police after killing a man but unknown to her the real reason is that The Order (an evil cult from Silent Hill) want to get Heather to return home thinking it will break the curse the town suffers . Anyway basically The Order finally catch up with them, kidnapping Harry in a successful attempt to lure her back to Silent Hill where Heather encounters untold horrors. 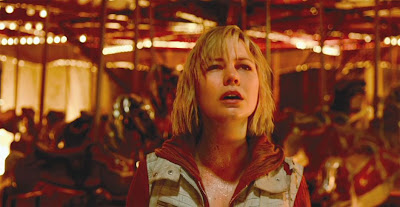 This film is not a great film, yet I loved it, I left the Cinema with a huge grin on my face. This is everything sequels should be. From start to finish Revelation is just insane, crazy, making no sense and flinging Heather from situation to situation with no care for logic. There is no respite in this film, no slow moments, it is just madness from start to finish. This is even worked into the plot; the first film had light world and dark world Silent Hill but here once it goes to dark world it stays there. I got the feeling this film was made for me, it is like a videogame brought to life.

There is so much fan service here for people who love the videogame series (one of my favourite series!) the film is crammed to bursting with references to the games. The plot is very much based on Silent Hill 3, it includes a large variety of locations from the game such as the shopping mall, insane asylum and amusement park. A lot of characters also appear, much the same as they were in the game but with twists to their story paths. The P.I Douglas Copeland, Claudia Wolf, Leonard Wolf, Alessa; a joy to see these characters all appear on the screen much like they were in the game. Vincent is the only changed character, being pretty much a good guy here, while in the game he was older and a damn sight creepier. 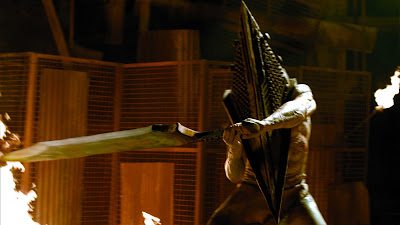 The fan service is intense here, my favourite being a notebook Heather finds of her fathers which contains ink drawings of various Silent Hill monsters from the games, even includes artwork of the monster children which were in Silent Hill 1! Silent Hill Origins, 1, 2, 3, and I swear even the latest Silent Hill game; Silent Hill: Downpour was referenced! Pure joy for a fan boy like me. A key scene also features a huge merry-go-round decked out with a blatant Umbrella symbol on it. This is a pure 'f**k you!' to the integrity of the Resident Evil film series, least that's what I took from it.

Very surprised to see Sean Bean reprise his role of Heathers father here, I thought he was too famous to be in the first one, so returning for the sequel I found even crazier. He is great even if he doesn't get to much screen time. My favourite horror actor of all time also turned up, I laughed out loud when I saw him emerge out of the darkness of a cell, chained up, dishevelled and crazy, looking like he was having the time of his life playing Leonard Wolf. Of course I am referring to the legend Malcolm McDowell who totally hams up his role for the very short screen time he gets. Vincent had another great actor; Kit Harington (from Game of Thrones) who made a relatively simple character into something interesting. These along with Carrie-Ann Moss as Claudia Wolf and several other characters from Silent Hill returning made quite a fantastic cast. I had not heard of main actress Adelaide Clemens before but she fitted the role of Heather perfectly. 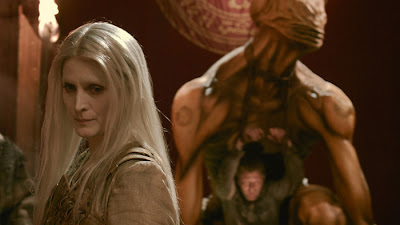 The monsters are varied and for the most part look great. Old favourites such as the zombie nurses and Pyramid Head appear (their inclusion especially seems purely for the fans) while a whole host of new monsters appear (my favourite was a weird spider made out of mannequin parts, very freaky looking).


My main problem with the film, much like the later games is that everything looks so clean, even when it isn't. A screaming man hanging upside down with a bag taped over his head, having his stomach cut into slices for a waiting chef to cook, a naked woman tied to a gurney slowly transforming into a mannequin, a homeless guy with a giant scar for a face; all look freaky, but too clinical, with none of the grime seen in say a Rob Zombie film. Great ideas though, and the film gets really messed up with its scenes of random violence given the impression the cursed town really is a part of Hell. Revelation is a paranoid nightmare shuffling down the tracks of the mind of an obsessive compulsive. Nightmare, but nightmare made to be viewed like a ghost train rather than to be really scary. 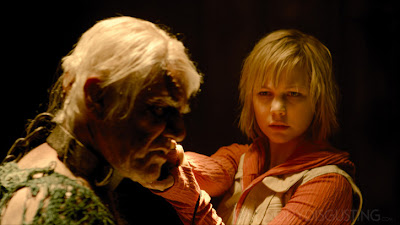 The actors are great, but they can't help a bad plot, bad in the sense that the ways characters act usually don't make much sense, and the way the plot unfolds is weird in places. Heather crawling down a ventilation shaft comes out randomly at the exact location she needed to get to, always in the exact right location at the right time, though this could be explained away with the mythos of the cursed town. An ill advised final boss fight between Pyramid Head (reduced to the role of a good guy!) and a demon was just strange and felt completely out of place, but then with the bonkers plot maybe it was exactly what was needed.

I got the distinct feeling that watching it without prior knowledge of the games and first film you would be totally lost and confused, as it was I was in geek heaven. It makes little sense yet I came away totally happy with what I had seen, a worthy Silent Hill film, but maybe one for the fans.

Posted by Daniel Simmonds at 14:47