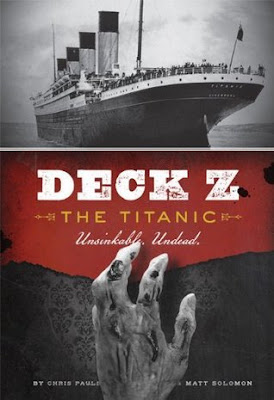 I have never seen the film Titanic so I was quite interested to read an account of how it came to sink, albeit one with added zombies. I read this book cover to cover in two days, though rather annoyingly finishing the book coincided with my Internet being cut off.

Everyone knows that the Titanic sunk on its maiden voyage, what people don't know is that a giant secret was covered up along with the sinking of the vessel.  Theodor Weiss; a German scientist is on the run from the German military after he discovers a virus that can turn the most gentle person into a savage monster impervious to pain or reason. The military want the virus to use as a biological weapon, Weiss hopes to flee to America where he can make a cure for the natural disease. Unfortunately for him and the other people of the Titanic there is a German agent on board who corners Weiss and takes the vial containing the virus. The inevitable soon happens and an outbreak of zombies starts to occur. Weiss teaming up with the crew of the Titanic must find a way to not only contain the outbreak, but also to locate the missing vial.

Deck Z: The Titanic is a great zombie book, I must admit I was surprised with how much of a real page turner it was. This is helped by really short chapters, at most around five or six pages, some not even a page long. Each chapter starts with a heading giving the location the chapter takes place in as well as the time it takes place. This gives a great sense of progression.

Doing some research after reading it I was surprised to see that a number of real life people are included in the tale including the ships Captain Edward Smith, White Starline's Chairman J.Bruce Ismay, and even the naval architect Thomas Andrews. I thought this was real cool, if a bit of an insult to the memories of these real people being used in such a strange context. That's not to say I don't approve, it gave the events more of a realistic feeling, and I have heard it say Captain Smith was portrayed poorly in the film, here he is pretty much the hero of the piece, armed with a sword dispatching zombies throughout, so redeemed. Bookending the story are two chapters based in modern day, a good addition even if it does lead to a predictable twist ending.

The zombies here are of the flesh eating kind, slow shambling, dumb hordes and quite gruesomely described, one part where a parade of zombies were getting chopped up in a giant fan was a highlight.  The characters are a hotch potch of stereotypes and deeper characters. Set in 1912 the sensibilities and opinions of the characters are different than the norm, the old setting brought some freshness to the genre. Main character Weiss is deeply flawed, others such as young girl Lou and Smith are more likable and given personality often lacking in these types of books.

Kinda a spoiler here but I was expecting the Titanic sinking to be a huge part of the book, but when this event occurs it is already over two thirds of the way through the story and dealt with really quite briefly. After the horror of a zombie outbreak aboard a ship, the sinking of the ship almost seems like a welcome relief to the characters trapped there.

Well written, simple yet entertaining I would really recommend this book, a decent zombie book with real life facts giving it a neat twist.