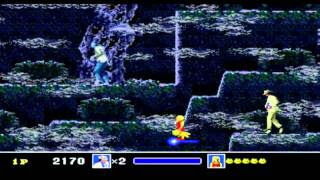 Moonwalker is quite a fun platformer based on the terrible Michael Jackson film of the same name.  Each level sees you as Jackson searching behind doors, in car boots, behind windows and bushes searching for children, kinda dubious when you think about the rumours. When you find them they say 'Michael!' and run off. Find all the children on a level and Bubbles the chimp appears and leads you to the boss. The game is split into 5 different areas, each with a different theme, and a different Michael Jackson tune playing.

The third area in the game is based in a graveyard, a graveyard where the main enemy type is a zombie. As you search the graveyard zombies rise up from graves, jump in from off screen and appears as bosses. You would think the song choice for this level would be obvious; Thriller right? Nope, instead for some reason the song chosen is 'Another Part of Me'. The Thriller tune appears briefly in one of the boss fights when you do your special dance attack (makes the zombies all start dancing like in Thriller for around 5 seconds). Cool to see zombies, but to this day I have never understood why the blatantly wrong song choice was chosen, though it has been suggested it may have been copyright issues as Michael Jackson never actually wrote Thriller.
Posted by Daniel Simmonds at 12:16