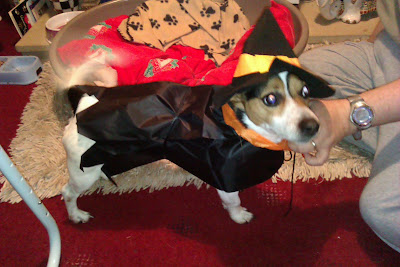 The dog in its Witch costume might look cute but soon after this picture was taken it went on a rampage, killing 3 and critically injuring 4 more. It was eventually subdued when a S.W.A.T team were called in and after a tense battle its satanic powers were defeated. Police Commissioner for the Northampton Metropolitan Police commented on the incident saying "It is a shame when dogs like this one lose their way and turn to the dark arts, to be honest I blame the owners, the tell tale signs were all there".
Posted by Daniel Simmonds at 06:19