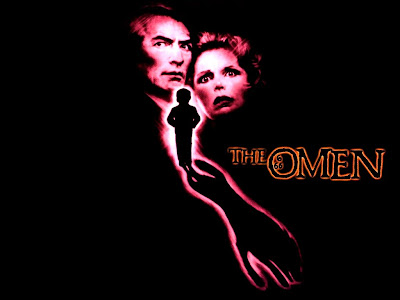 A special person brought me The Omen box set a while back, I have finally gotten around to watching the films, I started today funnily enough with the first film. I had seen it a while back but my memory was kinda hazy on the particulars of it (the perils of getting old).

When Robert Thorn's son dies soon after being born the staff at the Roman hospital he is at convince Thorn to substitute the dead child for one whose mother died during childbirth so as not to break the heart of Thorn's unknowing wife; Katherine (played by Lee Remick). Five years later and Robert is the American ambassador in London. Their child Damien is loved by them but then things begin to change. Their sons nanny commits suicide to be replaced by a creepy nanny Mrs Baylock, a strange Rottweiler takes up residence at their house, while Damien himself starts to behave strangely (such as being fearful of churches and terrifying animals just by his presence) A crazed priest contacts Robert and informs him in the worst way possible that his son is not actually his son; it is the Antichrist! As more and more people start dying around him Robert sets out to find the truth. 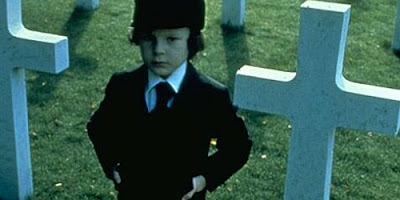 Despite being made in the mid 70's this film still holds up today, it has really good direction, and interesting plot and a great soundtrack, though is not actually scary. Gregory Peck as Robert is brilliantly cast, his slow realisation that Damien is evil is long coming but well done. Damien himself is not really in the film too much, and when he is he is either being silent or screaming. There are a lot of deaths in this film, far more than I recalled, people get killed in a way that made me realise the Final Destination films must be partially based on this. The death's are all violent, but all set up like accidents as well, such as the iconic death of a priest who gets speared after a metal pole on a church roof is struck by lightning causing it to fly off. Other death's are equally as grim; a hanging nurse, several falls from high places, decapitation and more, very well shot with good special effects used.

The film is nearly two hours long but doesn't outstay its welcome with a variety of locations used. Though mainly set in London it also takes in Italy and Jerusalem. While for the most part a thriller there is also a few horror parts, one in particular set in a derelict graveyard was particularly memorable due to a pack of demonic dogs. The making of the film had a lot of bizarre accidents surrounding it such as planes getting struck by lightning, the dog handler being attacked by one of the Rottweilers, and even the girlfriend of one of the crew members got decapitated in a car crash. All nasty stuff but led to the belief by some working on the film that it was cursed by Satan itself!

My film posts get far more views than my other posts yet lately I have been concentrating on the videogames. As such my brain has actually melted and I am struggling to remember how to review films! I will end by stating  The Omen is a definite horror classic. They do not make them like this anymore!..unless you count the 2006 remake that is supposed to be kinda similar (review coming soon!)