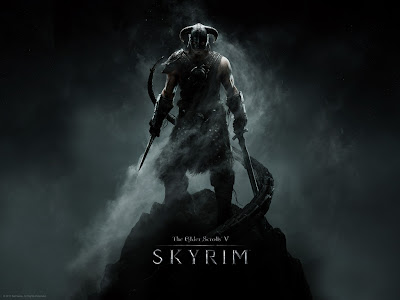 Well after nearly a year and 93 hours later I am happy that I have seen as much of Skyrim and done as many quests as I felt the need to. I can't say I completed it as there is not an actual end to it as far as I can tell.  Sure you can get all the quests done, but the world of Skyrim will still be there to explore.

Skyrim sees you as a prisoner on your way to your execution when a dragon appears which everyone finds quite exciting as they thought dragons only to be legends. Through the course of the game you come to discover that you are 'dragonborn' able to use the magic 'shouts' only dragons can, and learn of just why dragons have come back. As always with these games though that is just the excuse for you to be in the world with side quests in the hundreds far out numbering the main plot. You get to join the Thieves guild, to join the Dark Brotherhood, to en roll at the Mages University, become a leader of a clan of Werewolves as well as carry out tasks for both Gods and Demons, but also simple village folk. 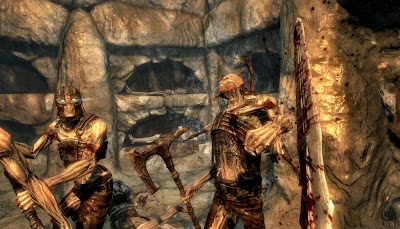 Skyrim looks beautiful, it is on the North of the continent and is an icy, snowy, mountainous region. The world looks simply stunning and feels like a place you would just wish was real. There are lots and lots of Towns and Villages dotted around, all with different feels to them and each stuffed to the gills with quests. Over 50 hours into the game and I still had not visited all the towns. The last game 'Oblivion' was not terribly exciting. It had a shed load of dungeons but they were all designed and looked the same.  Here the dungeons are much more interesting and varied and effort has been made to give a unique feeling between them thanks to journals and objects scattered around the dungeons. Some areas in these different caverns and forts actually made me gasp out loud in the level design. Usefully now also there is usually a secret passage at the end of each dungeon that takes you right back to the entrance without needing to back track.

The combat system is so much better this time. You can have magic equipped to one hand, a weapon to the other, or double hands of magic, or even a sword and shield, two handed weapon. All so easily selectable, so streamlined. Oblivion had a broken levelling up system that ended up turning enemies into nightmares, but this levelling system is sublime. Each time you level up you can increase either your health, magic, or stamina and then put one point into a billion different level trees (everything from archery up to lock picking, smithing, armour and speech). 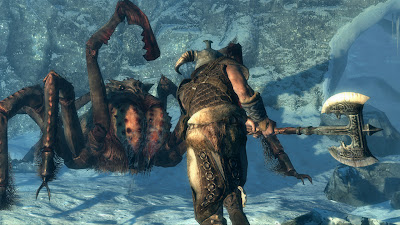 I am struggling to write this, for me Skyrim was not a game, it was an experience, a chance to walk in a fantasy world, a living breathing place. Sure you have zero respect for anyone as they all behave so stupidly but you can just exist without the fear of violence. I would play this game intensely for about a month at a time, and then have a few months off before charging back into it. The shouts are a genius move, they do a variety of different things. For instance one shout gives you Jedi powers; the ability to fling enemies across the environment, by far my favourite shout as there is nothing more satisfying than flinging an enemy off a huge cliff (of which Skyrim has many). Other shouts include the ability to slow down time, move at lightning speeds, summon animals to fight with you, scare away enemies and even summon a freaking dragon to take on your foes!

Enemies are varied, a collection of bandits, soldiers, wizards, witches, zombies (many many zombies!), monsters and animals. Merely wondering around the world of Skyrim will see you assaulted by bears, ogres, wisps and even dragons who act as boss characters. Any fight with a dragon is epic, they attack at any time, in the middle of a swamp, up a mountain, they even attack you in villages where you assume you would have been safe. Killing dragons is important though as each dead one gives you a dragon soul which is used to get more shouts and upgrade your existing ones. 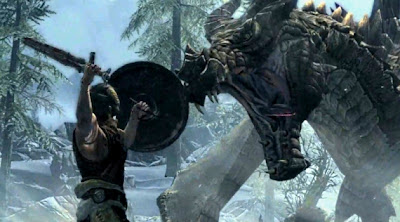 So at 93 hours I have for the time being ended my journey, taken a seat at the Ragged Flagon and put my feet up. There are still many many quests waiting for me, as well as the DLC that features a storyline revolving around vampires, and DLC that lets you purchase a house in the country and raise a family. I don't think I will ever be done with Skyrim, it is the ultimate open world game, even better than Fallout 3 which I adore. It just looks so good, so complete, so large and epic and so damn fun just to walk around in, whether your pushing your demonic horse to its limits (I never knew riding him off a cliff would lead to such a humorous but deadly accident!), bothering the neutral giants and their mammoth herds, collecting plants, or hunting wildlife this game just keeps on giving. Truly epic.

Posted by Daniel Simmonds at 07:13