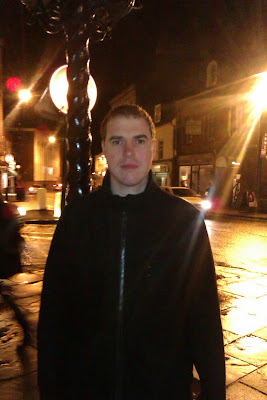 I was dead excited to be going on the Northampton Ghost Tour 2012. There were loads of groups going on the tour, a new group every 20 minutes. The tour guide seemed friendly enough, it's just that she was constantly stumbling over her lines she was reading from a script.

So the first stop for our tour was Northampton Museum that used to be a female prison. After the 2nd health and safety lecture of the night we were taken downstairs into the basement. It has been changed a lot, so was hard to imagine that there used to be a prison there. We were led into a small room were a woman (also stumbling constantly over her lines) babbled on about fairy tale Witches before telling us a true story about the mother of some girl who used to live in Northamptonshire and had been accused of being a Witch...but was found innocent. To help with her tale two young girls mimed the events, one playing the mother, and one the daughter. It was not particularly interesting and gave me a bad sign that tonight was going to be a total waste of the Halloween witching hours. Then we were led through the basement and back out on to the streets. An attempt to create scares was made by the girls who banged on a toilet door and screamed a bit, more irritating than anything to be honest.

With a heavy heart we set off to the old courthouse. Yet another health and safety lecture and we were taken into a courtroom were members of the group were asked to take part in a mock trial of a man accused of setting fire to a tramp. All the group were invited to be a part of the thing, apart from me and my sister who were surplus, so we sat at the back of the room bored out of our minds wondering just what this had to do with anything remotely connected to ghosts, or Halloween.

Thankfully the endurance of the trial came to an end and we were led down to the holding cells in the courthouse where many criminals marked for execution used to be kept. Our group was split in two and I headed off to the male holding cells. A great looking old fashioned jailer took us to two different cells, one with a man who had been convicted of dismembering a woman and dumping her body, who read us a letter written to his wife the day before he was killed, and then to a cell of a man who called himself Captain Slash (Captain Slash was actually a real highway man who was executed in Northampton in 1826). His over the tops rantings were fun, you could tell the actor was enjoying himself.  Not soon after the lights went out and the jailer announced a prisoner had escaped. I was at the back of the queue to leave and so had Captain Slash appear from the darkness and try and scare me. I totally wasn't expecting that, but also didn't bat an eyelid as I thought it was just someone touching my shoulder to get past.

We were taken out to the courthouse car park where we were shown were the scaffolds that people used to be hung at (13 at a time) used to be. Unfortunately the tour guide was in a hurry, so after a 'we better hurry I can feel the presence of ghosts' (all said while reading from her script) we were rushed on, not giving me time to appreciate the location.

The courtroom cells was the first actually good part of the evening, so I was more happy as I headed off to the Northampton Library.  After another health and safety lecture we were led up the stairs. First we were told about a Grey Lady ghost who was said to haunt the library (cue little girl walking past in a grey dress). Then about the ghost of a miserable boss said to haunt the place (cue a door opening and a guy shouting at us). Then we were led to a room which had been slightly decked out like a ballroom. During the 2nd World War dances were held there.  Here there was a whole bunch of young girls wearing white face paint (I don't know why, there seemed to be a large surplus of young actor females on the darn tour). They played out some odd dance before advancing on the crowd watching, trying their best to look angry at us. then they retreated up some stairs and acted dead.

We were then led downstairs. Special mention has to go to the staircase here, populated by a boy pretending to be the ghost of a janitor. He was hilarious, shouting at us to move on, and ad libbing a lot, very entertaining, my highlight of the night.

We went into a small room, some guy I couldn't see from around some shelves was reciting a poem or something. It all ended when yet another small girl trying to look ghostly led us out and down some stairs while the janitor appeared again to shout some more at us. Downstairs we were taken outside, here the tour guide told us about the ghost of a builder who was supposed to have died on the site and haunts the staircase we had just came down.

We were then given a little story by more damned young girls about the tale of a cursed doll that roamed the halls of a school in Finedon before some pupils tracked it down and hacked off its feet. Then we were shunted into a small room were an unintelligible poem was recited from a speaker to us.

The night was drawing to a close now and our group were led to a room were we were introduced to a bunch of misfits known as the Northampton Paranormal Research Society. To be truthful this was a great part of the tour. They may have been odd looking, but they were interesting in their shyness and the things they said. It was fascinating to see some real life ghosts hunters. They talked about a poltergeist they investigated who knocked over fridges and lifted up sofas, and they warned vehemently against the use of Ouija boards (as the man said, 'they open up portals to evil dimensions'). So jealous of these guys, they must have an interesting life.

And that was it, tour over at around nearly two hours I got my monies worth (tickets were £7 each). It may not have been scary, it may have been utterly terrible in places but all in all I did enjoy it. Next time I would suggest they actually get some adult actors for the adult roles.
Posted by Daniel Simmonds at 15:39

Loved this!!! Will definitely go and have a gander at this next year!! :)