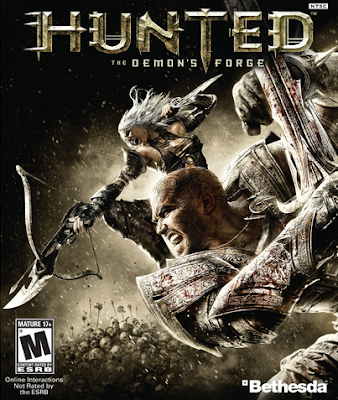 When this game first came out I was quite interested in it despite its average review scores. It has been described as a Gears of War style dark fantasy game, by that it means there is a lot of cover based shooting (though with crossbows, and bows rather than sci-fi weaponry).

Two mercenaries;  E'lara (a female Elf) and Caddoc (a gruff warrior) are investigating some ruins that Caddoc had been having dreams about. There they discover a mysterious stone and the woman from Caddoc's dream - a strange supernatural being called Seraphine. She tells them that the stone is called the Death Stone and has the power to make them stronger. She tells the duo that a nearby village where she lives has came under attack by monsters (goblin type creatures) and that her body has been kidnapped. With promises of her rich father being able to compensate them for rescuing her they set off. 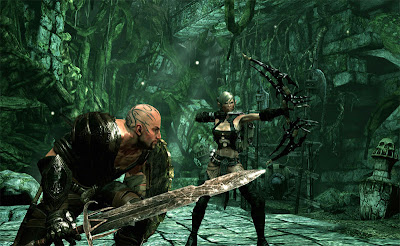 I really enjoyed this game even if it is pretty much a one trick pony, I have to admit I finished the game months ago so my recollection might be a bit hazy. I tried to write a review at the time but was just not able to do so.  Hunted is a big game, at least 10 hours long I would say. It is split into around 6 to 8 large areas, each made up of many levels.  Initially you are in a town that is under attack by Lord of the Ring style goblins (the games main enemy type). You learn that the captured townsfolk had been taken to the large (very large!) mines under the city. I don't know why but I felt that the mines were the last area in the game so I was very surprised to discover I was not even half way into the game at this point.

Levels for the most part are quite linear, with multiple routes given the illusion of freedom. For the most part Hunted is a cover based shooter. In single player you can choose to be the warrior or Elf, but the Elf with her crossbow was just the obvious choice. It is fun in the same Gears of War way to slowly advance from cover to cover picking off enemies. I can imagine co-op (for which the game is designed) would be a lot of fun. If your partner gets downed you can revive them, and doors that require both of you to open act as check points. 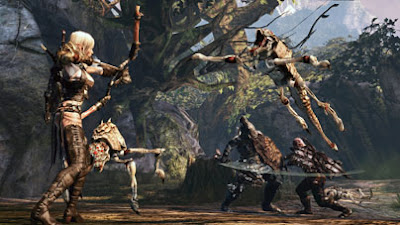 As I mentioned enemies for the most part are goblins, but there are also minotaurs, skeletons and other fantasy monsters as well as a variety of boss battles that split up each area. The story is usual fantasy fare, done with a dark feel. The constant exchange of jokes and insults between the two protagonists is always entertaining and manages to provide a lot of backstory for the two likable people.

Throughout the game you can find new weapons and skills, and you get a RPG lite mechanic where you can upgrade your magic and skills. Expected turret sections appear, as well as survival based sections where you must hold out against waves of attacking enemies. There are plenty of optional side quests which really impressed due to the variety and scope of them. Side quests usually involved quite large areas with their own mood and mini stories. My favourite one involved going into a pitch dark tomb in which you had to use a torch to light your way.  The walls were made up of skeletons whose arms reached out to try and grab you. 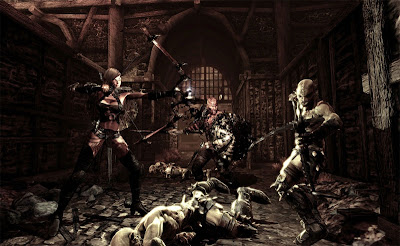 As I did say earlier it has been a while since I played the game, but it was a lot of fun, nothing fantastic, but an enjoyable, violent fantasy romp which actually looks quite good save for the odd animation issue (your finishing moves with the bow often look terrible for instance).