Oh dear is the first words that come into my head space when thinking about this game.  The Final Fantasy series has had some amazing, fantastic games up until Final Fantasy X.  XI was the first MMORPG (Massively Multi-player Online Role Playing Game) in the series and so had no interest for me, while XII was a good game but just didn't feel like a Final Fantasy game with it's weird feel of being an offline MMORPG. A lot had been said of the very linear structure to XIII and my gosh they were not joking.

The game involves two different worlds, something to do with the main characters (an annoying bunch) being marked with a cursed tattoo and being hunted by their own people. I must say that I did not finish this game, in the year and a half I was borrowing it I got 40 hours into it before I had to give it back.  I was not sorry to see it go, it was a millstone around my neck. Due to the long gaps in between playing it I can't really recall the story much. 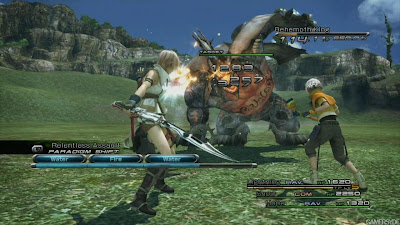 Alarm bells started ringing when Leona Lewis was picked to do the theme tune for the game, the soundtrack overall is very soppy and not at all memorable which is a damn shame as the Final Fantasy series has produced some of the very best videogame music in my humble opinion. The characters are to a tee all unlikeable. You have an annoying, miserable, whiny blond haired kid who I just wanted to punch, an afro'd older guy, some Australian perky one, and others equally annoying. The female lead Lightning at least has good character design, but she too is really unlikeable. Not a good thing to have all the characters you control people you can't care at all about.

This has to be the most linear RPG I have ever played, there has been plenty in the past,  but least they gave the illusion of freedom, not so here. The first 15 hours of the game were spent running down literally straight roads with no room for deviation, an utter snooze fest that moderately frequent location changes couldn't ease. Gone are the villages, instead you get to shop via a computer screen; fun City.  After the first 15 hours the game world opens up, but just into a series of really, really long winding paths. 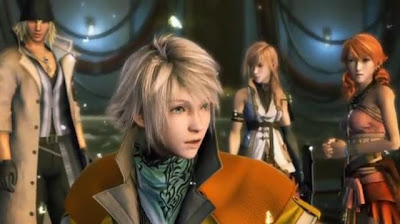 Battles can be avoided but you wont get stronger that way. The battles themselves are not too fun to do, often feeling not in control of your character and the 2 A.I controlled ones you bring into battles. The enemy design is boring, a mixture of animals and robots for the main part that elicit no excitement, boss battles are no fun, and the way you have to fight Summons before being able to use them is terrible.

It's not all bad news though, the game looks stunning, really good graphics, and the level up system that sees you putting points into orbs on a board is addictive. Now I don't have the game anymore I highly doubt I will ever buy it myself to finish it. It is such a boring time sink that it is really, really hard to recommend it.