Dreadtime Stories: A Fungus Among Us and The Late Shift - Horror Audiobook reviews

I don't think I have ever listened to audio books before but upon hearing about a series of short horror tales I was keen to give them a listen. The audio books presented by Fangoria comprise 5 different tales of terror in an almost Twilight Zone styling. Before I begin I must mention that the stories are narrated by Malcolm McDowell who is one of my favourite actors, he has such a great voice, perfect for narrating horror! The first one I heard was...

A Fungus Among Us 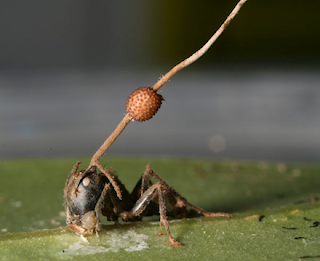 An outbreak of insanity breaks out across a City; random people start committing acts of violence; robbing banks, burning down buildings and murdering others. The perpetrators later die when a strange giant snake like root cracks out from the top of their heads! Two detectives set out to find out what kind of drug is causing this epidemic and try to find a way to stop it before it is too late.

Immediately I was impressed by the high quality of this recording, sound effects are used to really create a sense of location, whether it be crickets chirping in the swamp, peoples footsteps, the sound of a fungus cracking out of someones brain...Cordyceps is a real life fungus that has the ability to turn ants into mindless slaves, controlling their actions to best infect the rest of the colony. A Fungus Among Us gets that scenario and applies it to humans, what if the Cordyceps fungus was able to infect and then control humans? By far the best thing about this tale is the regular interruptions from McDowell as he gleefully comments on the tale, he interrupts a lot of times during the 40 odd minutes and each time it is very welcome with his corny but funny puns.

The story comes across like something from The Twilight zone and is enjoyable and suspenseful despite the simplicity of it. The voice actors are good and are different enough that there is no confusion over who is who. I recently heard about Cordyceps and what it can do so this tale came along at the right time. I myself have thought about what would happen if it was able to affect humans the same way it does ants.

With fantastic sound effects, a fast paced story, great actors and of course Malcolm McDowell this is one great story. 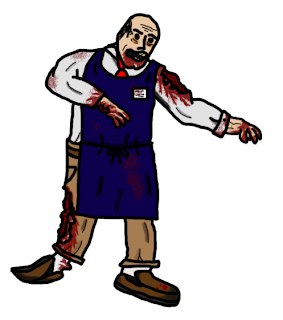 I excitedly jumped into this tale after the goodness of the last one I heard. This time around McDowell doesn't have as much to say, and when he does he really is more of a narrator than a commentator.

Two friends on the way back from a late night horror film viewing pop into a 24 hour convenience store where they come across the late shift worker who seems almost retarded. Recognising the till clerk one of the friends decides to come back later to see why he was being so rude to them. This innocent event leads to  the uncovering of a ridiculous, yet somehow sinister plan to use the recently deceased as late night workers for cheap labour.

I didn't enjoy this tale as much, it took me a while to understand why, the reason I came to realise was because I was well aware of the fact there was not going to be a good outcome for the man who uncovers the plot. Everywhere he runs it he is easily found, the conspiracy runs to almost humorous levels with seemingly anyone who runs a business open to the secret. I shared his paranoia and panic as he realises his days are numbered.

The story is a nice analogy for the modern worker, and the dark humour contained in it was appreciated though on a serious note it was a bit confusing sometimes due to the large amount of locations used within the 40 odd minutes. Still once again there are some ace sound effects used, and again the voice acting is of a high standard.

There are currently 3 other Dreadtime stories available to download, one about a werewolf, one about time travel (usually awesome!), and one about a psycho. I might be forced to get those also if they are as good as these! All 5 can be brought for the cheap price of 93 pence each at Audio Go, a cool site that appears to have a large selection of audio books for not bad prices!
Posted by Daniel Simmonds at 14:08