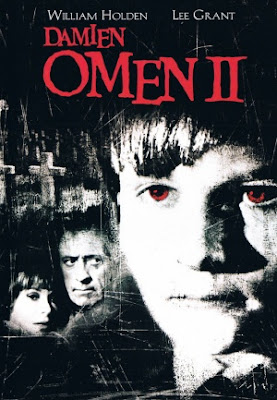 As promised here is the second of the five Omen films. The title of this film is really gonna mess with my filing system (Damien: Omen II? I would have gone with The Omen II).

Initially the film takes places one week after the end of The Omen, but that's just to wrap up the death of a surviving character. Skip forward 7 years and Damien is now 13, living with his Uncle's family in America. He seems quite a normal kid, so normal that he himself doesn't even realise there is anything strange about himself, but a series of disciples of the Devil awaken in him the knowledge that he is the Antichrist. As he comes to terms with this knowledge all around him who discover his evil die in a series of random accidents. 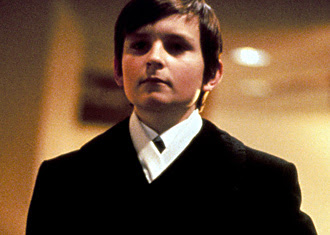 First off Jonathan Scott-Taylor as Damien is not very scary at all. He has kind of a piercing stare about him but is quite small and has a very high pitched voice making anything he says sound silly. William Holden as Richard Thorn (Damien's Uncle) follows the same kind of route that Gregory Peck travelled down in the first film. Interestingly enough Holden was originally picked to play Peck's character so is cool that he instead ended up playing the brother. In some ways this film could almost be seen as a half remake of The Omen but with a lot more ridiculous deaths. The special effects do not seem to be as good, whether it be a woman getting her eyes pecked out by crows (big hair to hide the fact it isn't the actress being attacked!), or the various random other deaths made quite humorous by the various actors actions. Pinned to the end of a speeding train all one character could do was wave his arms around in the air which had me laughing out loud; I'm sure that was not the intended response.

This is not a scary film, I would not say even mildly scary, at least The Omen had its moments. That isn't to say it is a snooze fest, for the near two hour running time I was plenty entertained, and pleasantly surprised that it was watchable and not just a cheap cash in. The plot is just a bit unbelievable, people who find out Damien is the Antichrist all need hardly any evidence, though the watchers who look out for the boy is a clever plot device which led to some obvious yet welcome twists.

All in all not a bad film, I have seen far worse horror sequels (Friday 13th Part II onwards for example). I shall continue on my Satanic journey and soon watch the rest. As always I will end by saying I really love Halloween, wish it was here all year long!