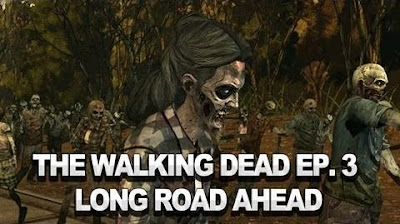 I am always excited when a new episode of The Walking Dead appears but after the last episode I could not see how this one could be better, surely there were no more tricks it could use to put me in tough situations. How wrong I was...

Long Road Ahead starts with the group still holed out at the Motel. Pretty soon though something happens which forces them to flee. The rest of the episode is a road trip as the gang set out on their way to Savannah where they hope to find a boat to freedom. 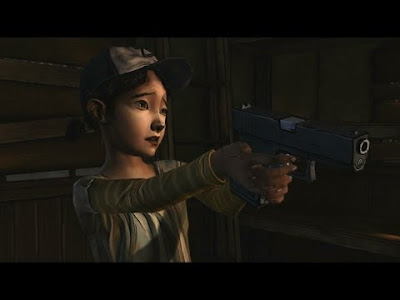 Wow is all I can say, this is a real downer of an episode. Where episode 1 set up the premise, and episode 2 was a self contained grisly thriller this episode is bleak as all hell with the opportunity for many of your group to die. As I have said before no one is safe no matter how key you think they may be to the game. The main part of Long Road Ahead involves a train, simple puzzles revolve around working out how to get it to start. Story wise a lot of exposition is given, while the arrival of a few new characters keeps things interesting. Your group are not innocents, all (with the exception of the kids) have shades of grey to them. Your relationship with Clementine is really still one of the best things in the series, it makes you genuinely want to protect the little kid.

Despite it still being an awesome game it is not as good as the previous episode, the puzzle bits are a tad annoying due to lots of back tracking while there is certainly a lot of action, and some real tough decisions (an early one saw you given the chance of shooting a bitten survivor, or leaving her as she is distracting the zombies with her screaming). One thing which did annoy me was that there were a few time sensitive actions you had to do when it just was not obvious where about on screen you should be clicking, one particular frustrating times was a fight with someone, I got beaten to pieces as I just could not work out how to defend myself until it was too late (apparently rather than punching the guys face I was supposed to have clicked on his fist). 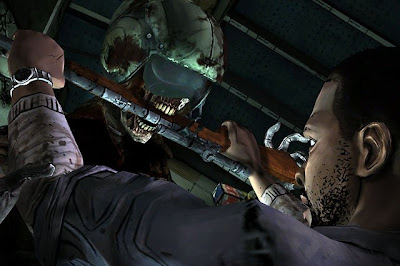 I am looking forward yet again to the next episode, a late plot update made sure of that. Plenty of action, plenty of zombies, and lots of sorrow creates yet another great The Walking Dead tale.