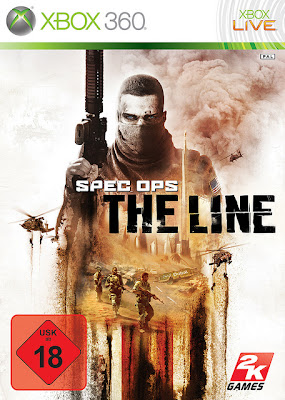 The worst sandstorm in recorded history hits the City of Dubai. An American Battalion; the 33rd, and led by war hero Colonel John Konrad go to the City to help with the evacuation. The 33rd go rogue after Konrad ignores orders to abandon his mission and leave the doomed place. The last message from him is that he is going to try to lead a caravan of 1000 survivors out of Dubai.  6 months later and a lone recorded message escapes from the sand storm surrounding the ruins, a looped message from Konrad. Three soldiers; Walker (the character you play as), Adams and Lugo are sent on a reconnaissance mission to see if the place does in fact still hold any survivors. Discovering Walker's idol Konrad is still alive he decides to change the mission into a rescue one. They are to head into the destroyed City and rescue John Konrad and any other survivors if in fact they even want rescuing... 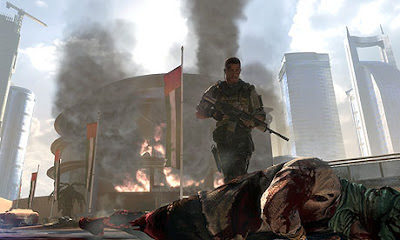 I loved this game, it is very grim, and bleak but makes you think about just what it is your doing. The City of Dubai is in a state of war, the C.I.A have provided the civilian population with weapons to fight back against the tyrannical 33rd who kept order with extreme measures. Your arrival leads to both sides attacking you. Dubai is full of corpses, bodies hanging from lamp posts, scenes of executions, torture, and crimes against humanity, a messy past it hints at. As you progress through the game though the actions you commit to achieve you goals make you question just how different you are from the brutal acts you have witnessed.

At first you and your squad act like generic soldier meat heads, barking out generic orders as you engage enemy forces. By the games end you and your squad have vastly changed. All 3 of you shouting and swearing your heads off. Also adding to this is the physical damage the 3 of you take, hell even the loading screens change. Where before you got information such as what different types of weapons do by the games end the information that pops up on loading screens changes to gems such as 'Do you feel like a hero yet?'. The game succeeds at questioning you the player for your actions, like Walker you are blindly carrying on, butchering everyone you encounter in order to reach your mystical goal. 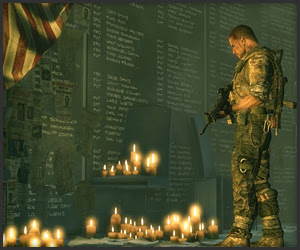 A few key events in particular shape you as you play, for me it wasn't the hokey 'shock factor' one (let down for me by average graphics) but a later one when you encounter an angry mob of unarmed civilians. By that point I just didn't think twice about gunning them down, the bleak nature of the game had gotten to me. The rescue mission turned completely on its head as I was now killing the people I had ventured into the doomed paradise to save. A few binary choices are given as you fight through the game but that was by far the most affecting.

How does it play though? In general it is a solid, yet unimaginative third person cover based shooter. Enemies are not too varied, you have the usual grunts, large heavily armoured troops, and the assortment of rocket launcher toting enemies, and snipers. The game is very linear, almost no multiple routes which other cover based shooters like Gears of War benefited from. There are some turret sections, a few optional stealth sections, and not too much else. Dubai comes across as a character though, sand can be used to drown enemies, but is also a hindrance, such as during one of the many sand storms that brings visibility down to a minimum. You are able to give very basic commands to your troops but I mostly ignored this. Locations are not too varied, many of the interior locations in particular are very samey large hotels and aquariums not feeling too different. 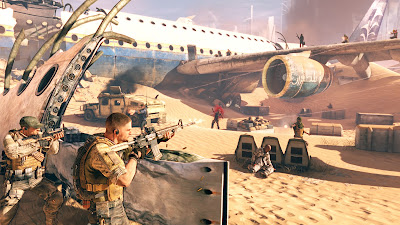 All in all this is a game that must be played for the story. The locations are full of incidental details, the hidden audio logs are very good, and the transition from good old American soldier to cold blooded maniac is a gradual, subtle shift, helped by liberal use of hallucinations and a grey moral compass. I would really recommend this game for an unsettling but thoughtful experience.

Posted by Daniel Simmonds at 09:52

Thanks for posting your review of Spec Ops, Rotting Zombie. I spent a few nights playing through the game with one of my friends that I work with at DISH. I thought the game was great, but a little too short for me to run out and buy. So instead I rented it for my PS3 through Blockbuster @Home. I beat it pretty quickly, and after a second play through, I sent it back. The game could use a few improvements, especially when moving from cover to cover, but the story and the moral ambiguity kept it interesting.