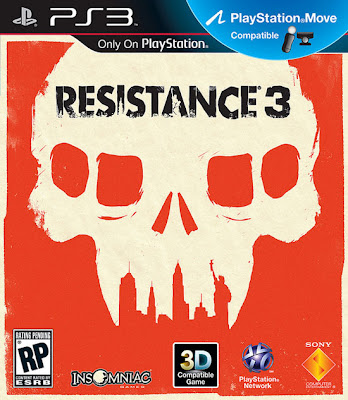 Originally touted as a killer exclusive title for the PS3 the first Resistance game proved to be really not very good or fun at all. Resistance 2 was a vast improvement, gone were the frustrating battles and instead Call of Duty style set pieces were the order of the day. Because of the big improvement I was expecting Resistance 3 to be more of the same really, and I was not disappointed, this really is the Call of Duty of Sci-fi horrors.

As Nathan Hale was (spoiler!) killed at the end of the second game this time you play as a different protagonist, and thankfully a more likable one.  This time around you are Joe Capelli; the man who killed Hale. Set 4 years after the last game you are in a small community of people hiding out against the Chimeran threat. The arrival of an invasion force leads to your settlement being destroyed, you discover that Hale rather than made things better accidentally created a worm hole above New York that links to the Chimeran home world. A scientist seeks you out convinced you are the man to escort him to New York so the worm hole can be destroyed. 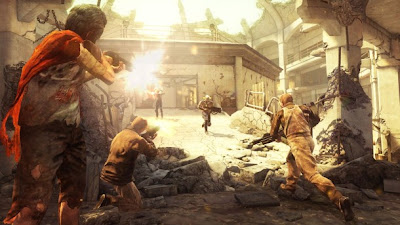 The story is again pretty terrible, your whole motivation for going on this stupid suicide mission is that your wife made you, very selfish of her! Again the levels are full of set pieces and various American locations such as Oklahoma, Missouri, Pennsylvania and of course New York. Each of the locations is vastly different in look and have their own self contained stories. You descend into the mines of a religious mining town to battle a monster the locals call 'Satan', you get incarcerated in a prison complex run by a horde of cannibal former inmates, you ride a boat through flooded St Louis pursued by giant monsters; all very different. The prison complex level was the biggest highlight, the games first inclusion of human enemies with things turning slightly into a Condemned style experience as you fight prisoners up close with a sledge hammer.

The weapons are better than ever, and level up with repeated use, my favourite by far was the shotgun which set enemies on fire, also a cool weapon was a bio gun that turned enemies into piles of bubbling gloop. The freeze ray was kinda fun but not very practical while favourites such as the gun that can fire through walls, and the gun that can lock onto enemies return. 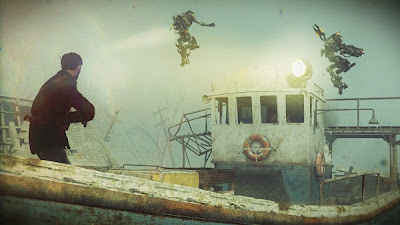 There are not really a lot of new enemy types, but there are already so many this was not a problem. The cannon fodder Chimerans, hulking beasts, shield protected robots, and the grims (the games version of zombies) all appear in huge numbers. Again health packs are the order of the day, and are usually enough of them that it doesn't distract from the fun. One annoyance I did have was that you click the right thumb stick to melee attack but often my character would mid firing do a melee attack as if I had pressed in the thumb stick when I had not. Also, the last levels set in New York are kind of bland it has to be said and brought to mind the worst levels of Resistance 1 and 2. There are not the crazy huge set pieces such as the amazingly tall monster of 2 but some such as the train attack and mine beast journey are still a lot of fun.

Resistance 3 tries to make you care more about the humans, at a few points you are free to wander small settlements but the interaction is minimal and I usually ended up skipping through these pretty quickly, also the notes you can collect are really boring to read, Bio-shock has proved that collectible things can be interesting. 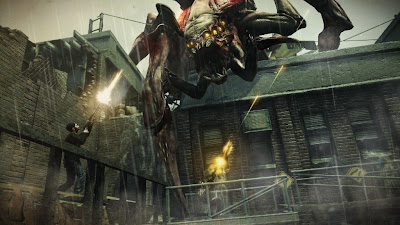 All in all another fun game that is worth a play.  The story is awful but the pacing is good, and apart from the last few levels shows a lot of variety.

Posted by Daniel Simmonds at 11:50