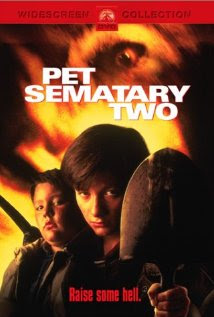 I have seen the first Pet Sematary and did like it, but I'm blowed if I could tell you what happened in it. It does have zombies of a sort in it, and so does it's bizarre sequel.

After his movie star Mum dies Jeff and his Dad move to a new Town. Jeff's new friend; fat boy Drew has his dog killed by his abusive step Dad. Remembering tales of an old Indian burial ground that legend says can bring dead things back to life he and Jeff decide to bury the dog there.  Soon the dog has returned, but it has changed, it is evil. The dead dog ends up killing Gus; Drew's step Dad and again not knowing what to do they bury him too. Gus returns, but has changed for the worst. Soon everyone is getting killed, killing, or bringing bodies back to life while Jeff walks around in a suit practising creepy smiles and thousand yard stares. 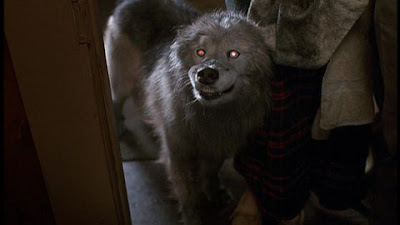 This is a real weird film. The first half is quite slow paced, it builds up characters, tries to slowly inch you into the horror but then half way through it is like someone wandered along, saw the film and thought to themselves that they quite fancied finishing it but had not the time to bother seeing what had already happened. The last half is just bizarre, Jeff turns creepy and evil with no explanation, then just as suddenly turns back into the hero. His dad wanders around the Town seemingly aimlessly; a zombie magnet, a completely unsuspecting hero with his nerdy looks. The main zombie Gus laughs sinisterly, doing random acts of violence while an awesome soundtrack plays.

To sum it up, the plot for this film just collapses on itself, no one really seems sure of exactly what it is they are supposed to be doing. An early highlight was a fist fight between John Conner of Terminator 2 fame (Edward Furlong plays Jeff) and one of the kids from Honey I Shrunk the Kids (Jared Rushton playing local bully Clyde) quite surreal to see these two people fighting. 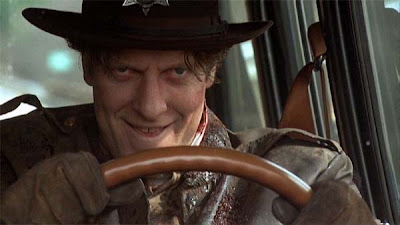 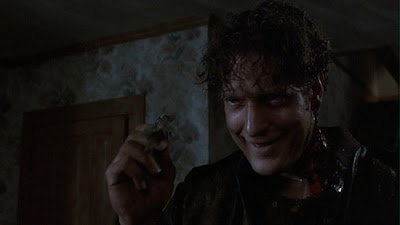 I did enjoy this film but it is quite the piece of rubbish! From nightmares about a woman with a dogs head, to the attacks from a blatantly puppet controlled pretend zombie dog this film has a lot to make you laugh, and I think it is unintentional which makes it all the better. It is not a great review, but I really don't know what to say, this is one strange, lost film! And for the record Clancy Brown as Gus wins the creepy smile-off between him and Furlong (only just though!)

Yeah, this movie is total garbage. But, it doesn't stop it from being at least mildly entertaining, and still slightly above average in the field.