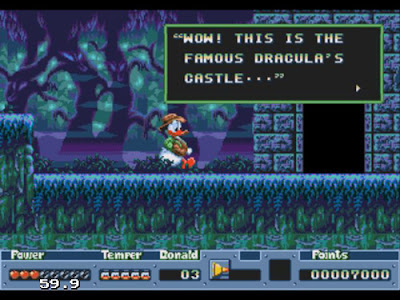 Quackshot is a Disney platformer on the Megadrive, starring Donald Duck. It s kind of a pastiche of Indiana Jones films. The game has a slight RPG twinge to it in that you can choose what level you wish to visit and if you can progress no further in one level you can exit it and explore another.

The plot of the game is that Donald has found a treasure map to the secret treasure of King Garuzia. To find it he follows clues that take him to a variety of locations around the world. The first horror themed level you encounter is Transylvania. After negotiating swamps full of bats you come across Count Dracula's Castle. As a kid I was always disappointed this was a Disney Count Dracula and not the awesome Count Duckula  from the 80's cartoon. The Castle is full of ghosts and bats that appear out of portraits. It also features a variety of coffins that open up to reveal skeletons. It ends in a battle against Count Dracula himself. 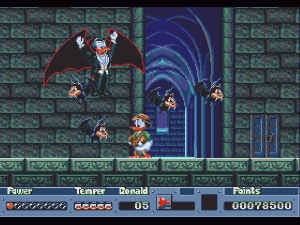 The next horror level is set upon a Viking Ship that is over run with ghosts. After entering the ship you battle a giant skeleton viking. The last horror section comes at the end of the game once you have come across King Garuzia's treasure which happens to be buried with the remains of King Garuzia. He comes to life and attacks you with a magical sword, I guess he could be classed as a zombie?


Anyway, Quackshot still holds up today and is a joy to play.
Posted by Daniel Simmonds at 07:40