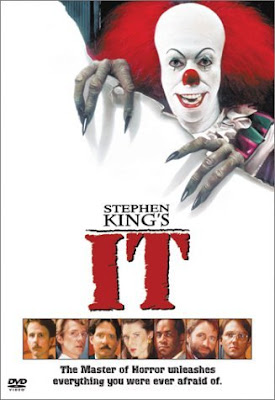 A friend recommended I watch this film so that I could see why clowns are creepy. Having watched it I can confirm that yes, the painted folk are now being seen in a more sinister light! Originally this was made as a 2 part TV series (based on the book by Stephen King) which I was surprised to see due to the quality of it all, though I guess that does account for why the film is very long (3 hours).

In 1960 a rash of murders and disappearances of children in the small Town of Derry, Maine has the Towns people worried. After Ben Denburgh's brother Georgie is found dead in a storm drain he starts to hallucinate of an evil clown who calls itself 'Pennywise' (played fantastically by the legend Tim Curry). Soon his friends (a bunch of misfits who call themselves 'The Loser's Club') all encounter the clown as well who taunts and teases them. Deciding that it is up to them to defeat 'It' as adults are unable see the clown or the hallucinations, they head to the sewers were it resides. After a battle It is defeated and the kids make a pact that if the monster should ever return they will come back to defeat it again.
30 years later after a new spate of murders and disappearances, the sole member of The Loser's Club to remain in Derry (Mike Hanlon) contacts the scattered group to fulfil the vow they once made. 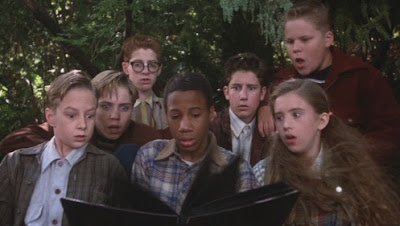 This is a good film, very enjoyable and has some great special effects. It (usually seen in its Pennywise the clown form) is a great villain though he does seem a bit cowardly when you take into account that he only goes after children, and even then only if they are alone. As the characters state many times during the movie It seems to be afraid of children as much as it want to eat them, hiding it's fear behind the mask of a cruel, vindictive clown. It has also to be said that it is kinda lame seemingly unable to physically hurt the children unless they are near it's lair, as a result it's hallucinations it causes are unsettling but overall harmless. At times these scenes felt like they were ripped straight out of A Nightmare on Elm Street except they usually end with the tormented kid running off rather than being brutally killed. Regardless of that though these scenes are all vastly different and entertaining, a kid being menaced by showers, exploding balloons full of blood, seeing dead family members, and more keep it all fresh.

The first half of the film sets up the back story and introduces the seven friends. It is clever in the way it mixes flashbacks with the 30 years later stuff, usually a flashback will involve one of the main characters standing in a pose which then melds to an image of their younger self holding the exact same pose. It gives you more of a connect to make it seems more like the adult and the child actors are playing the same characters which is sometimes lacking in films that deal with different time periods. 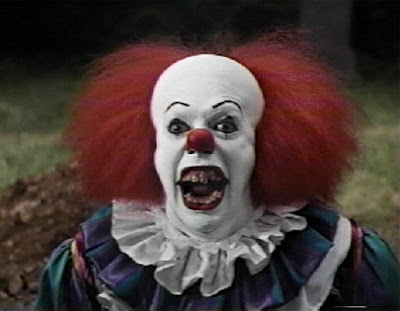 While the film is not scary there is no denying that Pennywise is very creepy, he steals the scenes he appears in and has a Freddy Kruger style malicious playfulness to him that fits the character well. I was pleased that there is no explanation of just what It is, or how it came to be either, makes your imagination work harder! Acting on the whole is very good, and the children and their adult counterparts all look quite a like. It's running time may be quite long but the film never once dragged, mainly down to the sheer likability of the group of friends which is helped by the length of the thing which gives them time to develop. One huge fault is the seemingly tacked on love interest story between grown up Ben and his wife. There is zero chemistry between the two actors, and a side plot that involves the wife following Ben back to Derry is just not needed as it brings nothing to the film.

My writing mojo has left me for the moment as you can probably tell but regardless watch It, is a horror classic. As a last note I feel I must mention due to this blog's name that a zombie does appear at one point.