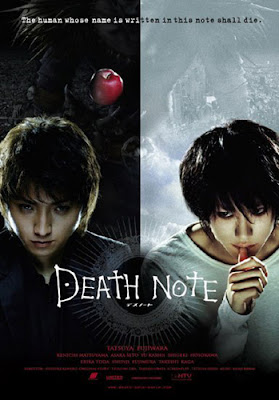 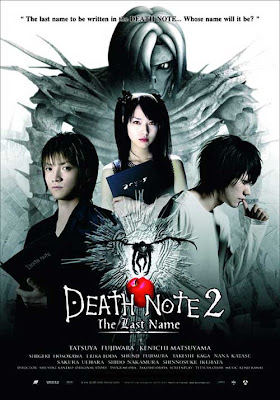 Having recently watched the Death Note anime I thought it was high time I watched the film adaptation again. The story was split into two separate films and even with a running time of around four and a half hours a lot has had to be missed out.

As mentioned in my poor review of the anime (here) Death Note is about a bright young student who discovers a note book with the power to kill people just by writing their name in it. The student; Light Yagami decides to use it to make the world a better place but in doing so leads the worlds greatest detective; a shadowy figure known only as 'L' to hunt him down. The events in the film are quite different to the show, it seems it is far more based on the manga (which I have only partly read). 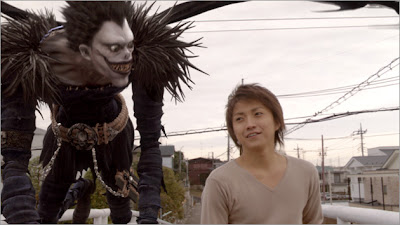 Playing Light is Tatsuya Fujiwara (of Battle Royale and Battle Royale II: Requiem fame), he fits the role well, but much like other portrayals of Light he comes across as evil, leading me again to question why no one apart from L really believes he is Kira. Ken'ichi Matsuyama plays L and actually looks very similar to the character. I don't really like the forced kookiness of L so again was not keen on him, but is well acted. It is a shame that the members of the police squad tasked to capture Kira are pushed to the sidelines a lot here with the exception of Light's father, and rookie detective Matsuda who like the anime and manga is virtually a pure comedy character.

While it can feel a bit rushed this is still a decent adaptation which looks like it had a high budget. The Gods of Death look kinda awful being computer generated but is a small price to pay, and far from the worst CGI I have seen (think that was the giant snake in Python). I learned from this film that it is really quite hard to make a heart attack victim look any good. A lot of people die of heart attacks in this film with a variety of over acting, and lack of spectacle. Of course it was easier in the anime to make these deaths look good (such as the one where a guy falls off a building and through a skylight) as is far cheaper to make. 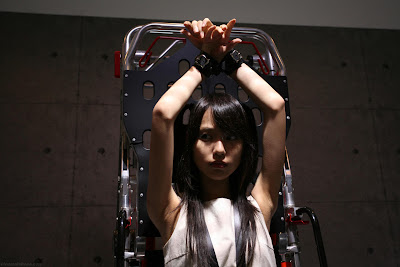 The film is different enough that it really is worth watching, I really enjoyed it, the length allows it to build up characters and though quite lacking on action entertains throughout never getting boring. Key events from the anime appear but awesome new scenes such as the first film's finale in an art gallery (probably taken from the manga) bring some great surprises. Being Japanese there are subtitles which for the most part are good, especially given the amount of text that also needed translating. Some lines are poorly translated though and made me want to marker pen my TV to correct them!

If you are too lazy to watch the fantastic anime, too poor to afford the billion manga's or just want to see what the fuss is all about these are the perfect films to watch.