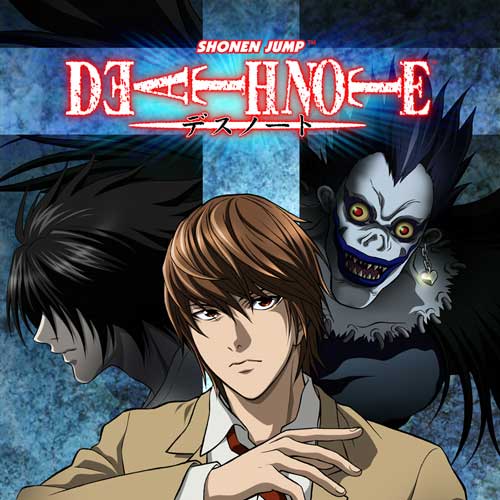 I have long loved the Death Note anime, having first watched it back when it was originally aired in Japan. I remember tuning in weekly to watch the next exciting episode of this novel show. Now the DVD boxset has dropped in price I have finally been able to watch it once more, plus with the distance of years I can now put up with the English dubbed version which sounded terrible before as I was used to the Japanese (with subtitles of course, I am not that amazing!)

Death Note spookily enough revolves heavily around a Death Note (not 100% sure but the clue may have been in the title). A Death Note is a book of death that Gods of Death each posses (called Shinigami's). If a humans name is written in the Death Note then that person will die exactly forty seconds later unless specified otherwise. A bored Shinigami called Ryuk decides to drop his Death Note into the human realm to see what happens. The person who discovers the book is a highly intelligent yet bored high school student; Light Yagami. After discovering the power of the book he is at first horrified, but then comes to realise that with the tool he now owns he can wipe out all evil from the world, make it into the perfect place where crime does not exist. 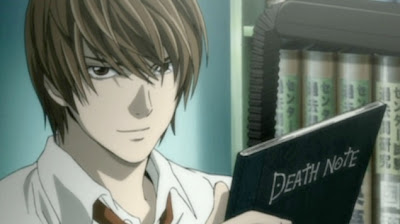 The story of Death Note is really about how power corrupts. Starting off with the very best intentions Light slowly heads down a dark path, his goal to wipe out evil from the world starts to affect more and more innocent people. Light realises his plan involves him murdering thousands of people, and he accepts that fact for he sees a world without crime as the perfect ideal. The Yang to Lights Ying comes in the form of the worlds best detective; L, Lights opposite in every way except intellect. L is determined to get Kira (as people come to call the Death Note killer) and have him executed. Light meanwhile is out to find out L's real identity and kill him. To use the Death Note you must know the person you want to kills name as well as what they look like, this leads to lots of clever twists and turns as Light and L constantly battle against each other.

At thirty seven episodes a lot happens, so much in fact that the show feels split into three different parts. Part 1 involves the battle between Light and L, this is to be honest the most exciting of the episodes as the rules of the Death Note are firmly established as is the intense rivalry between the two. The middle episodes turn far more light hearted with Light's love interest Misa in particular being animated in a comedy way with lots of exaggerations that feel kinda out of place in such a usually serious but exciting show. It wraps up with a far more serious end with suspicion intensified as the net appears to be closing in on Light. 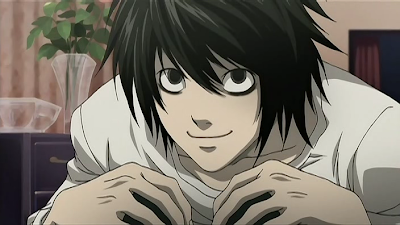 Death Note is such an exciting and cerebral show, with many people split on who actually is on the path of true justice; L who sees Kira as nothing more than an evil serial killer, and Kira who sees L as someone trying to protect criminals from meeting their deserved fates.

The soundtrack is very good, and it all is really well drawn and directed. It really takes it's time with some episodes, one of my favourite episodes is a twenty minute discussion between Light and a woman who has evidence to reveal Kira's identity. Light is desperate to trick the woman to give him her real name and a tense time is had as he manipulates her for this information. 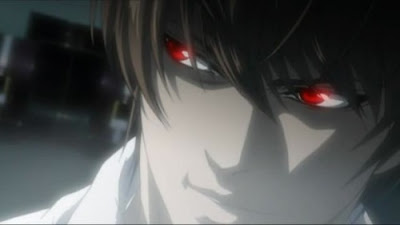 This is not a good review! But is practice for when I review the Death Note films (arrived in the post today). This is really such a clever, unique and thrilling show, sure the English voice dubs are nowhere near as good as the original Japanese voice actors but with distance that doesn't matter. My main complaints are firstly that it always seems super obvious that Light is the bad guy, it really seems silly at times how the people around him don't see what he really is. Secondly at thirty seven episodes it does drag a bit, the last part in particular seems to be there just for length, and again as mentioned some of the voice acting is not fantastic. Still damn worth a watch.

Posted by Daniel Simmonds at 11:16