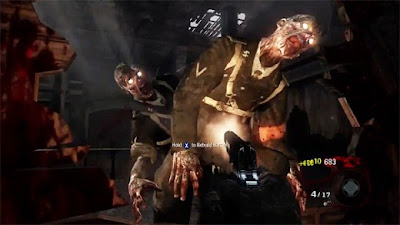 Zombies first appeared in Call of Duty: World at War and returned for Black Ops. While the main game was a balls to the wall action FPS zombies gave a more frenzied survival spin to things. Included with the game are three different zombie based missions in which you must hold out against swarms of ghouls.

I had only tried this mode once until recently when a friend of mine suggested we play it. Expecting to be good at it I was instead shocked to find out I was no good at it, my friend at first patient reduced to screaming and shouting at me as I repeatedly got eaten by zombies, shot at thin air, and ran around screaming.  Team work is integral to the Zombies mode, you must work together to keep your barricades built, and watch each others backs. Single player makes this harder but also provides you with the opportunity to get medicine which will revive you should you die. 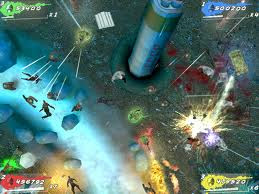 The first of the 3 levels is titled 'Kino der toten' (translates to Theatre of the Dead) the silly intro has you time travelling back to the second World War to a theatre under siege from the undead. In multiplayer we could only last to around the fourth round (I was a bit rusty!), on my own I got to round six where hell hounds made short work of me.  The second zombie level is set in the Pentagon, called 'Five'. Even sillier than Kino this has you playing as one of 4 real life historical figures (including JFK, and Fidel Castro).

The last of the zombie modes is set up like a retro style shooter. The action takes place with a birds eye view as you go from area to area fighting waves of zombies. Quite a similar feel to Smash TV, is fun but not as good or as tense as the FPS survivals. 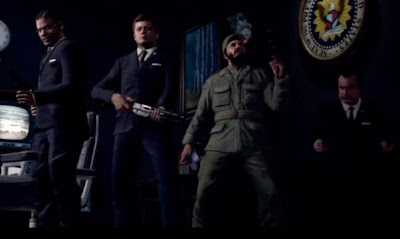 These modes work at making you feel very vulnerable, limited weapons, limited health, and ever increasing odds create a feeling of panic. People were sceptical when the modes where first announced with World at War but have proved to be a fan favourite with a variety of DLC offering new levels (including one set on the Moon I believe!)
Posted by Daniel Simmonds at 14:48