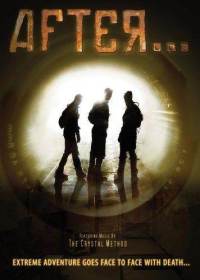 I knew when I picked up a load of cheap horrors the decision might come back to bite me, but hey, it was three films for £5, a bargain I thought. You can always tell how popular a film is by the number of images on Google...this one, After... had just the one.

After... sounded kind of interesting, though a tad similar to The Tunnel. Three thrill seekers who are into 'urban exploration' decided to head to Moscow to explore Stalin's mythical Metro-2 subway system. After getting into it they soon become hunted by soldiers in biohazard suits, mingle with hordes of radiation infused homeless people, and take part in their very own music video, while 'artsy' flashbacks give insight into the main characters past.

Nate is most definitely the main protagonist, his wife Adrian, and her brother Jay are nearly background characters, is kind of a shame as Nate is such a miserable person. This film is like one huge music video, or a bad acid trip put on camera. The soundtrack is by The Crystal Method and it has to be said is very good. What is not so good is how the film seems to be cut and spliced to fit in with the music. Lots and lots of strobe lighting, extreme close ups and shaky camera work. I very nearly stopped watching after just a few minutes as the shaky extreme close ups were giving me motion sickness. Unfortunately the crew does not seem able to resist inserting handheld camera shots every couple of seconds, irritating and unneeded.

The Metro setting is cool in theory but in practice like The Tunnel it just seems to be a variety of boring looking underground corridors. A Jacob's Ladder style influence is apparent though in this film. Everywhere Nate goes in the underground he sees glimpses of an eyeless man in a baseball cap, who (spoiler!) it turns out had some dark link to his past. Slowly going crazy Nate seems aimless, the two with him don't really comment on anything of note. The flashbacks at least take away from the darkness.

Later on the film just goes crazy in a strange way, not a particularly interesting way. When people die they seem to disintegrate, Nate starts literally warping around to different places, and there is only so many times the film can force the obvious twist down your throat before you just say 'enough already, I get it!' After all that the film just ends, no resolution.

Someone on the internet (I cannot recall who) said that if After... had been a four minute music video it would have worked, but as a near 80 minute film it runs out of steam far far too soon, I totally agree with that statement.