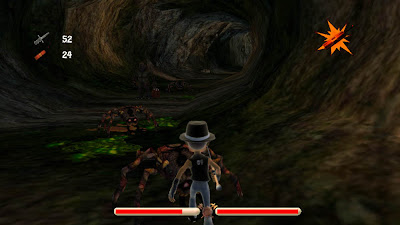 Been mopping up my old demos on the old 360, this one was right at the end so decided after many years to give it a try. I have said it before, and I will say it again: nearly all X-Box Indie games really suck. And after half an hour looking online I have been unable to find a cover for the game.

In trapped you play as your X-Box avatar. The pre-game sequence sees you enter a giant cave only to be trapped in after a boulder rolls down over the entrance. As you explore the cave you come under attack from the creatures of the cave (mainly giant bats and trolls it seems).

The good things first, it has a nice title that sums up the game. Now onto the bad. Your avatar looks completely removed from the dark surroundings you are in, the collision detection is awful, it looks awful, you make a very deep pained sound when you get hit, the controls are dodgy and it is not fun.

I don't know why I suffer the slings and arrows of outrageously bad Indie games, it's not like anyone cares about them anyway, it's just there are so many horror games on there that occasionally (very occasionally) a good one does come around (Dead Pixels, Decay, and The Pit spring to mind).