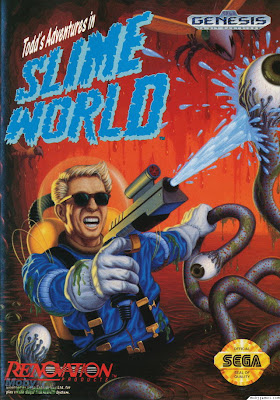 It has been a disgustingly long time since I last did a blog post, I blame starting a new job for sapping me off my time and energy. I was recently playing through a bunch of old Megadrive games I had not gotten around to playing when I come across this gem. An early example of a survival horror (well 1991) with one of the best soundtracks ever!

You play as Todd (a 2nd player as Rooney if they so wish) who has been sent to a newly discovered planet (nick named slime world) to explore it. There are 6 different game modes, each set in an alternate time line. In some your ship was destroyed in orbit and you have crash landed and must get to the evac point, another one has your ship getting damaged meaning your weapons have been destroyed. Yet another version has the whole of slime world facing imminent meltdown, you must harvest mushrooms which can postpone the planets destruction. Slime world is a vicious place where corrosive slime drips from the ceilings, and all the strange creatures have evolved from the slime. Pools of water dotted around the labyrinthine levels give you opportunity to wash off the stuff before it kills you. 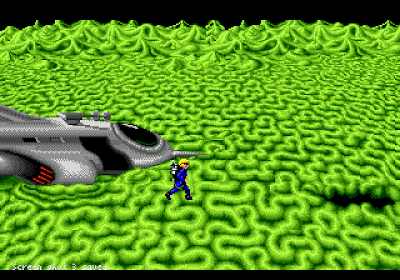 First off, as mentioned this is a survival horror game, the odds are stacked heavily against you. You constantly have to try and avoid the slime which is everywhere, even the slime gems explode in a deadly shower of slime if accidentally shot. The game is set in narrow, claustrophobic  tunnels beneath the surface of the planet. You have an electronic map, it all looks quite metroidvania like except there is no back tracking needed.

I thought the Playstation 2 game The Getaway was the first game to show real time damage but this game is my new earliest example. You physically become covered in green slime as you advance, and an abrasive electronic noise gives you an indicator of how near to death you are. Luckily for you, you are not powerless, you have access to a deadly...water pistol. The water pistol can take out a lot of the alien creatures with one hit though even if they do explode in goblets of slime. You also can pick up a variety of tools such as a jet pack, slime repellent, cleanser, and more. I never actually worked out how to use these items. 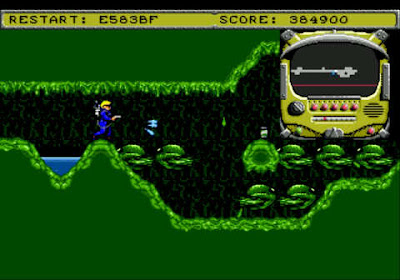 The music is excellent, each of the 6 different game types has its own theme, all alien sounding noises, drums and droning repetitions that really get stuck in the head. The basic sound effects add to the atmosphere also with electronic noises given when falling from a distance, taking damage, shooting, very basic at times but works.

I really do not know another game like this. It is not perfect, it is very hard on some modes (though frequent check points and infinite lives help) the control of Todd is quite jerky making precise jumps a bit trickier than they should be (most shown in the mode known as Logic in which instant death lurks around every corner). Still there is a lot of game here, and while it is a bit green it does give plenty of atmosphere and a sense of being out of your depth.

Posted by Daniel Simmonds at 02:31

I remember this game! My brother used to play and I would watch because he didn't like when I touched his things...


Anyhow, I remember this gaming seeming impossible to beat because all the odds up against you.

It is crazy hard, but that is what makes it so tense as it is so easy to get messed up :)